Known for its vibrant country music scene and Southern hospitality, dog-friendly Nashville, TN should be your next destination for a weekend vacation. Fall is a great time to visit Music City, when events like Nashville Oktoberfest and the Nashville Pet Expo welcome pups to pawty with their parents. In addition, the CMA Awards roll into town in November, drawing thousands of music lovers to the city. Spend 72 hours with your canine companion listening to live bands while sipping local craft brews, sampling specialties like hot chicken and barbecue, walking along the Cumberland River, sightseeing in parks, and learning more about the city’s history on a spooky ghost tour. Pack your bags and get ready for a fun-filled weekend with your four-legged friend in Nashville! 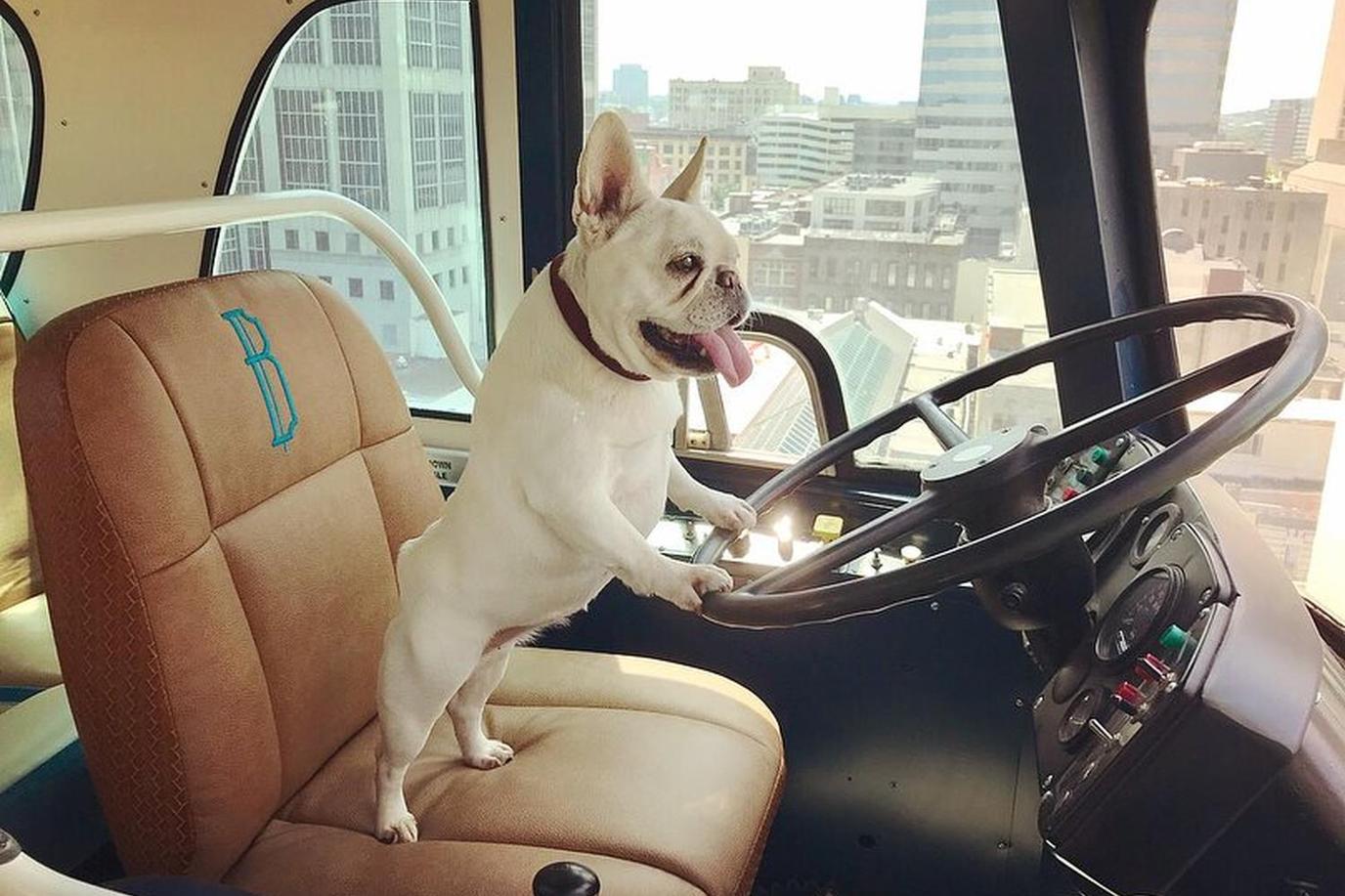 Let Fido take a spin in a 1956 Scenicruiser bus at the Bobby Hotel’s Rooftop Bar.

Check in to the pet-friendly Bobby Hotel, a AAA Four-Diamond boutique hotel located just steps away from all of the action on Broadway (aka the Honky Tonk Highway) in Nashville’s bustling downtown. You’ll be greeted by the hotel’s resident pet ambassador, a shepherd mix named Sasha. Inside the room, dog treats and toys are available for purchase in the minibar. Bobby Hotel also offers a red towel with Sasha’s face printed on it that guests can take home for $25, with all proceeds going to the place where she was rescued, Country Road Animal Rescue. The hotel’s “Dog-Friendly Haute Dogs Menu” features five chef-prepared meals like turkey fried rice, steak and potatoes and salmon risotto, all for $8. The gourmet dog food is available for in-room dining, at the Cafe at Bobby or on the Rooftop Lounge. Bobby Hotel welcomes pets of any size for an additional $50 per pet, per stay. Nightly rates start at $224. Let your pup play on the artificial turf at this downtown dog park.

Take a walk to Riverfront Park Dog Park and allow your mutt to run and play after your journey. He can stretch all four legs in the 13,000-square-foot fenced dog park with eco-friendly artificial turf. There are benches where you can sit and catch up on emails with the park’s free Wi-Fi. If Fido gets thirsty, all of the water fountains and bottle-filling stations include a fountain for your pooch, too!

Sample some of Nashville’s ‘cue at Peg Leg Porker in the downtown neighborhood known as The Gulch. Your dog is welcome on the covered patio where he can sip on water while you chow down on award-winning smoked BBQ. Start off with an order of pimento cheese (the “caviar of the South”) and saltines followed by pulled pork or a rack of dry ribs with sides of mac n’ cheese, coleslaw or BBQ beans. Wash it all down with one of the 11 local brews on tap or a refreshing glass of sweet iced tea. Save room for one of the fried pies (available in chocolate, apple or peach) topped with a scoop of vanilla ice cream.

Tennessee Brew Works is going to the dogs!Photo by @tennesseebarkworks

After supper, head to Tennessee Brew Works’ taproom to sample some Nashville craft beer while listening to live music on the dog-friendly outdoor patio. It’s a good value since there’s no cover charge on Friday nights. Order a flight so you can try several small pours from the brewery’s selection. Fido can be your drinking buddy since there are water bowls just for him. Be sure to post a pic of your pup at the brewery and use the hashtags #tennesseebarkworks and #bringfido! If you’re in the mood to bar-hop, check out Rock Bottom’s pet-friendly patio on Broadway on your way back to the hotel. 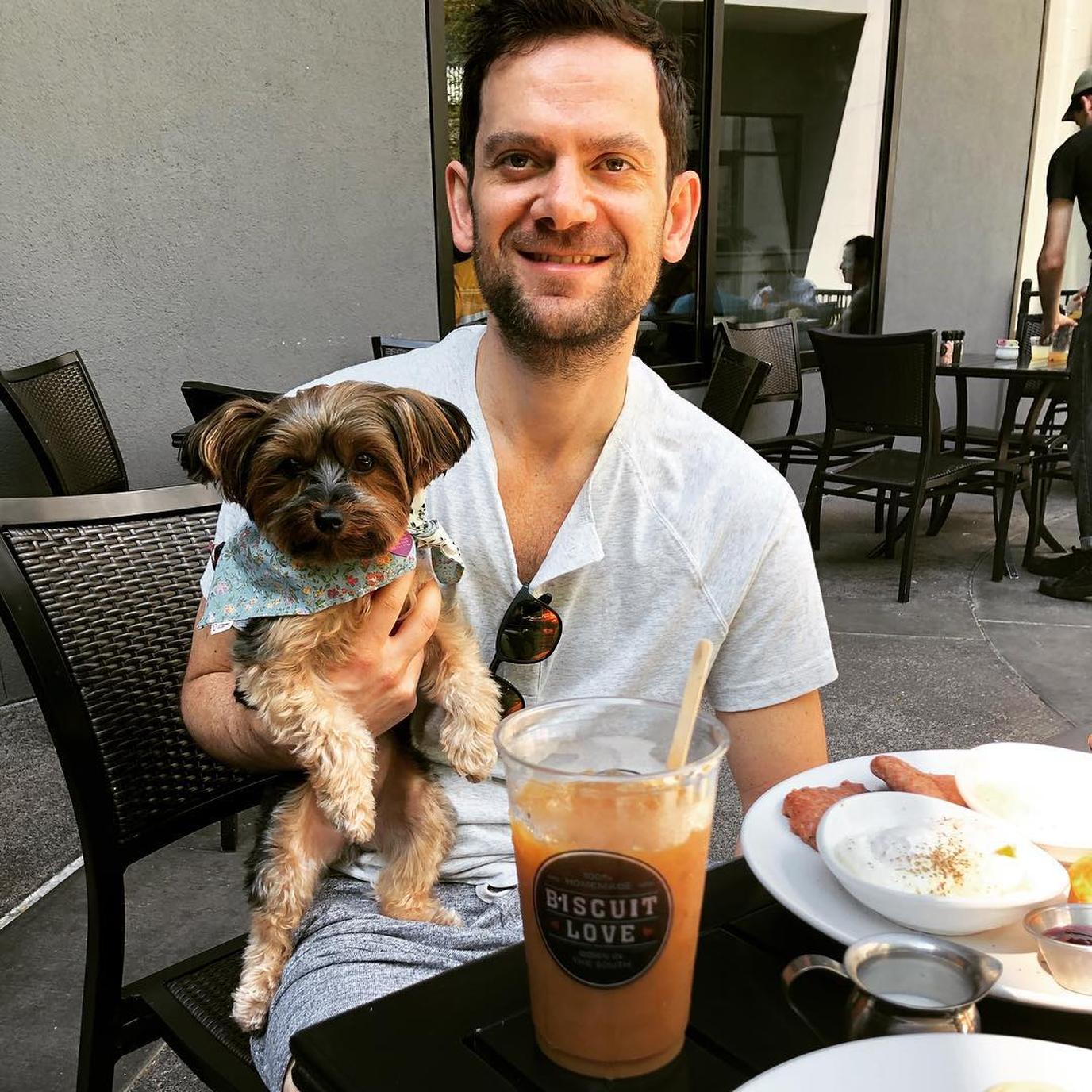 “This is not the kind of biscuit that I was expecting.” – Photo by @btess274

Biscuit Love’s breakfast is such a “pupular” draw in Nashville’s Hillsboro Village that you might have to wait in line. It’s well worth it for one of the eatery’s lauded biscuits or its signature Bonuts, which are fried biscuit dough rounds tossed in sugar and topped with lemon mascarpone cheese on top of a blueberry compote. Your pooch is welcome to join you at one of the outdoor tables while you dig into Southern food for the soul. Start off with a strong iced coffee or a breakfast cocktail (you’re on vacation, right?) like a bloody mary garnished with pickled veggies or a mimosa. If you’re hungry, try the East Nasty Biscuit, which was named “Best Sandwich of 2015” by Bon Appétit. This fluffy, buttery open-faced sandwich is made with a fried chicken thigh topped with creamy sausage gravy and aged white cheddar cheese. If you’re in the mood for something sweet, order the Gertie, a buttermilk biscuit smothered in chocolate gravy, peanut butter and caramelized banana jam and garnished with pretzel crunch. Don’t make Fido beg, treat him to a side order of a biscuit with gravy for $5.

See why Nashville is known as the “Athens of the South” in Centennial Park.Photo by @murphysmedia

Walk off some of those calories in Centennial Park. This 132-acre urban oasis features a full-scale replica of the iconic Parthenon, a 1-mile hiking trail alongside Lake Watauga and Centennial Dog Park, where your canine companion can play off leash. Keep your eyes peeled for celebrities and country music stars who frequent this beautiful spot with their pooches.

Refuel at the covered, heated patio of Edley’s Bar-B-Que in the dog-friendly 12 South neighborhood. Catch a game on one of the outdoor TVs while you munch on fried okra served with jalapeno ranch to start. Follow it up with brisket tacos, fried catfish sandwich, or a burnt ends platter with grits casserole, cornbread and banana pudding. Sip on a Bushwhacker or Edley’s Bourbon Tea from the bar while Fido slurps cold H2O.

He’ll have a tongue-wagging good time shopping at White’s Mercantile.Photo by @dollydollydoxinfree

Shop for the perfect Music City souvenir with your pup in tow at White’s Mercantile, also located in 12 South. Your dog will be given a treat by an employee while you pick him out a new collar at this hip gift store owned by music legend Hank Williams’ granddaughter. Then head over to Oscar-winning actress and Nashville native Reese Witherspoon’s Draper James flagship store. The chic, Southern-inspired boutique carries home goods, gift items and women’s apparel and accessories. Continue your pet-friendly shopping spree and pick up some retro threads at Savant Vintage, new or used wheels at Halcyon Bike Shop, or a pair of jeans that fit just right at Imogene + Willie.

“Do you come here often?” Photo by @oh_walter_my_corgi

Stop by the Frothy Monkey for a coffee break on the dog-friendly front porch. Perk up with a locally roasted cup of joe while Fido works on his pickup lines with the four-legged locals.

After you’re sufficiently caffeinated, walk down 12 Avenue South to Sevier Park. Take a breather on the tranquil lawn or get some exercise with your leashed pup along the walking path.

“I’ll have a dog treat and bowl of water. Keep ‘em coming!”Photo by @bianca_nicole_x

Conclude your tour of 12 South with an early dinner at Urban Grub, located in a renovated car wash. Once you score a seat on the pet-friendly patio, your good boy will be greeted by your server with a water bowl and house-made dog treats. Nosh on eclectic Southern cuisine like wood-fired oysters served with truffled mustard, dry-aged steak frites, shrimp and grits or the Lobster BLT Flatbread.

Bring Fido along on the AmeriGhost Haunted Downtown Nashville Tour to learn about the historical and haunted heritage of Music City from a professional guide dressed in costume. During this 90-minute walk, you and your pup will visit Nashville’s landmark sightseeing stops including Ryman Auditorium, Printer’s Alley and the Tennessee State Capitol. Your tour guide will tell you all about the city’s haunted and supernatural past. Tickets cost $17 for those 11 years and older, $7 for children ages seven to 11, and are free for children six years and younger and dogs. 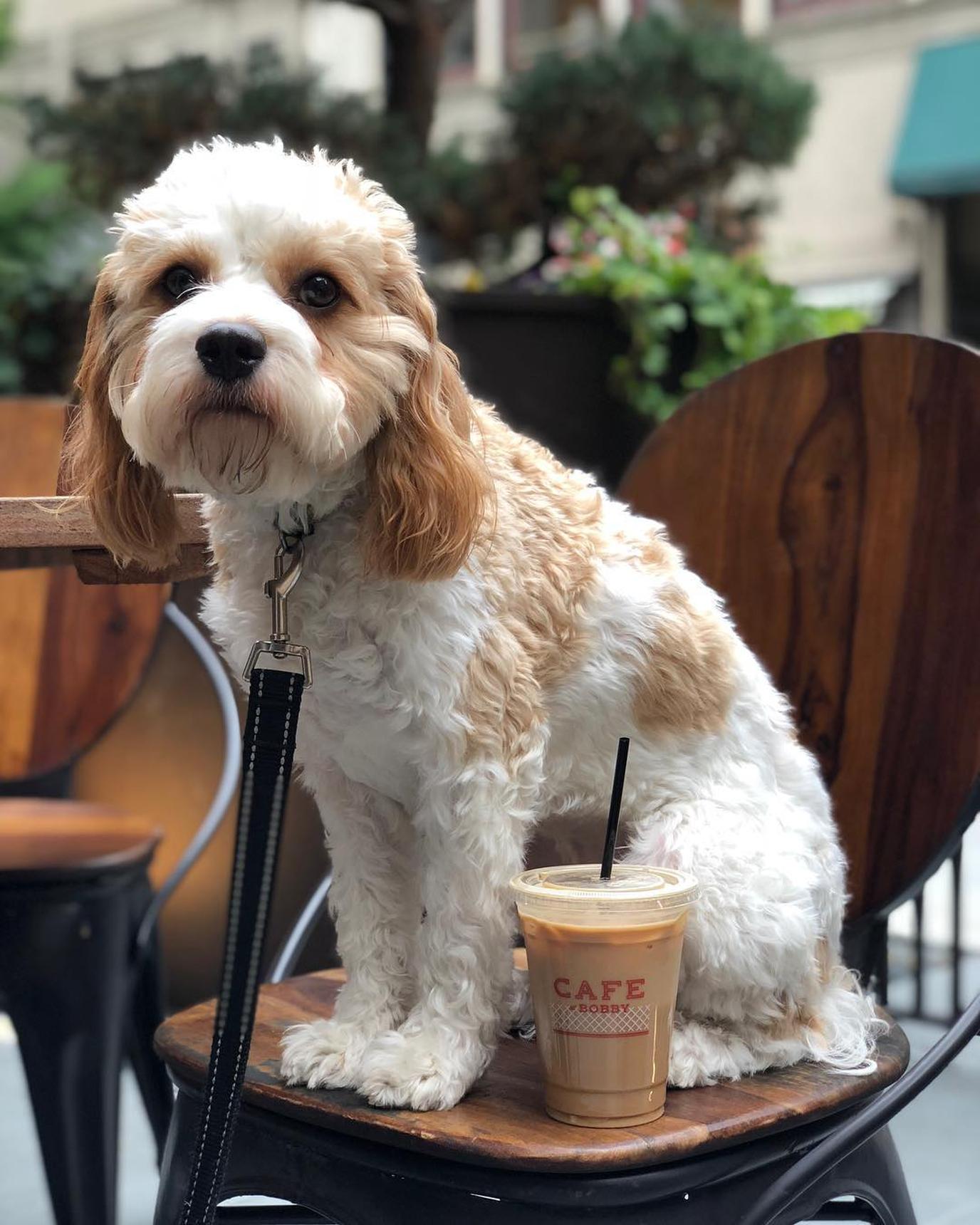 Get a cuppa with your puppa. – Photo by @rustipuppi

9 a.m. Breakfast at Cafe at Bobby

Break the fast with your pup on the outdoor patio at the hotel’s Cafe at Bobby. Enjoy a nitro cold brew coffee or “the hair of the dog” with Bobby’s Mary alongside a ham and cheese croissant or cheese danish. Those with bigger appetites can order a Butter Pecan Waffle topped with bourbon-pecan butter, maple syrup and whipped cream, or the Cafe Breakfast with choice of sausage, bacon or country ham, two eggs, roasted potatoes and toast or English muffin. Order Fido the Chicken and Potato Hash from the Haute Dogs Menu. 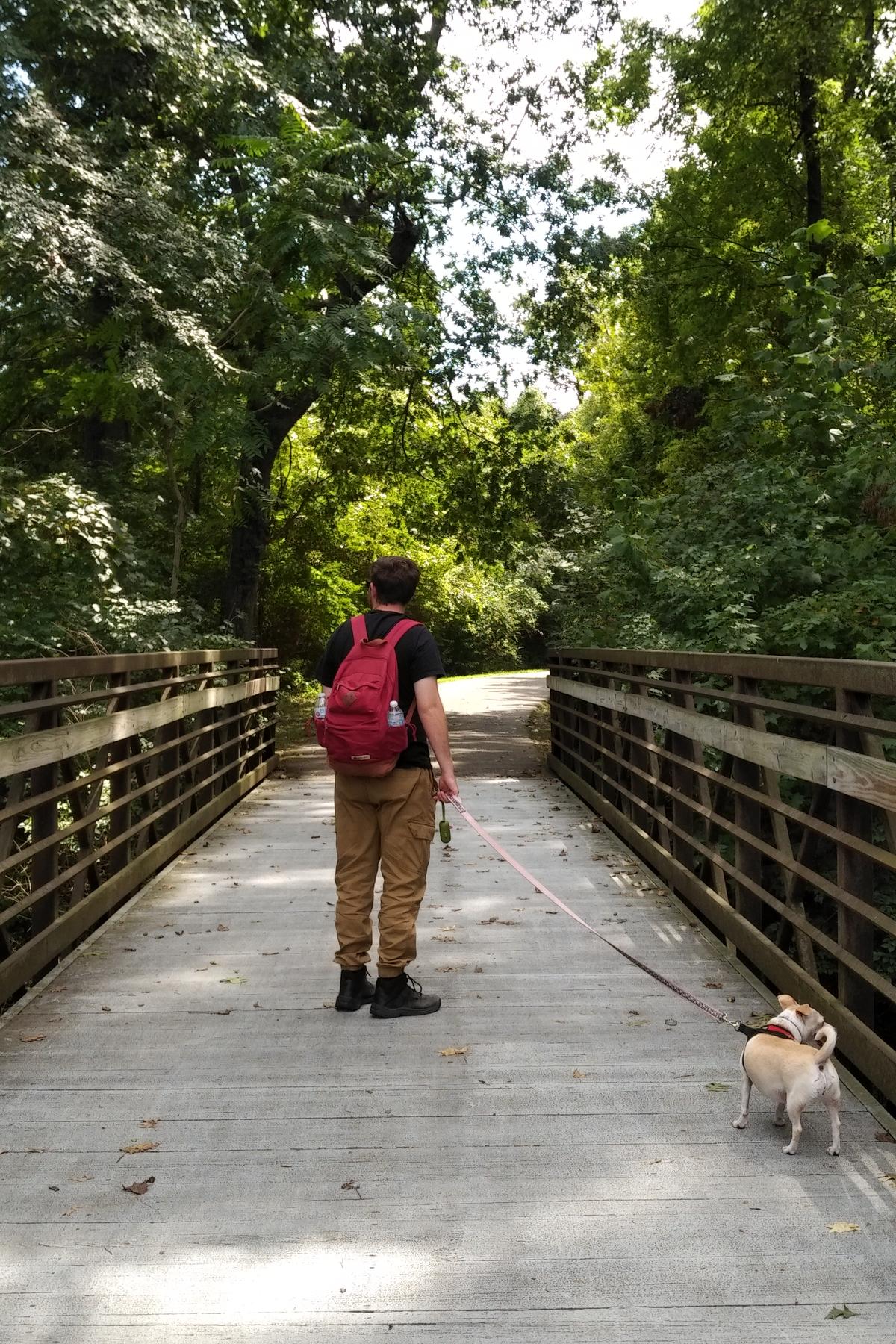 Take a walk in nature before heading home.

Spend the morning exploring Shelby Bottoms Greenway with your leashed pup. This beautiful trail is paved and features Shelby Dog Park at one end. Bring plenty of water and dog waste bags!

“I’m gonna need a big bowl of water after this!”Photo by @tastetravelunravel

12 p.m. Hot Chicken and a Cool Park Before Heading Home With a Tired Hound Dog

Stop in at Hattie B’s Hot Chicken for lunch to sample some of the chicken for which Nashville is famous. Pups are welcome to join you on the covered patio while you eat spicy chicken tenders, sandwiches and wings. Just be sure to get extra water so you don’t have to drink from the dog bowl! Once you’ve finished, head to Edwin Warner Dog Park and let Fido run off any extra energy before you depart Music City.

“What do you mean it’s time to leave?”Photo by @maverickandmurals

This post from BringFido originally appeared as A Weekend in Dog-Friendly Nashville.