Dogs are everywhere and we love them, so it’s no surprise that the vast and ever-expanding world of fiction just has dogs in it. Some as companions to heroes, powerful beasts, majestic creatures, and others are even the star of their own stories. Here are a few books and comics you can find in stores on paperback or audio that have some of the coolest dogs in fiction. So shout out to all the nerdy dog lovers out there because we’re bringing you some of the coolest dogs in books and comics! 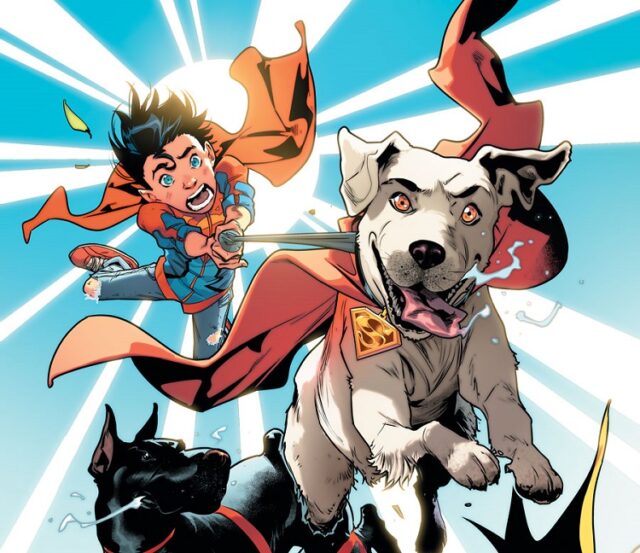 First appearing in Action Comics #210 in 1995 Krypto has been a core member of the Superman family for decades; Krypto has even been part of not one but two super pet teams, the Legion of Super Pets and the Space Canine Patrol Agency.  Krypto arrived on earth years after Clark Kent while he was still called Superboy and became best friends ever since.

With virtually the same powers as Superman, Krypto has been an adorable part of the Superman mythos and has been there for virtually every event and crisis in DC’s long history of comic book continuity. Krypto even adds a level of heart and compassion that Superman himself can’t achieve because a dog’s love is something else. Continuing on our comic book train we got Lockjaw, a loyal pet to the royal family of the Inhumans in Marvel comics. First appearing in Fantastic Four #45 in 1965 Lockjaw has been an invaluable part of the Inhumans and has been there for almost every major arc in the Inhumans’ long history in comics. With his ability to teleport to different dimensions, track scents through dimensional space, and his super strength you can bet Lockjaw will be right there when his superhero team needs him.

Last on our list of comic book dogs is Barnabas the dog of Destruction from the graphic novel series Sandman; first appearing in Sandman #43. This next good boy gained the ability to speak after spending too much time with his Endless master Destruction. Through the years Barnabas has become a little critical of his master’s actions and has a penchant for fine art. Once Dream and Delirium had found Destruction after a long time, Destruction gave Barnabas to his sister Delirium. This unlikely duo has become lifelong friends that care for and support each other. Dogsbody follows the story of a star called Sirius who lost a powerful cosmic tool called the Zoi and is accused of murder by his fellow Luminaries. As punishment Sirius was sentenced to live one lifetime as a dog on earth named Leo to search for the Zoi. If he succeeds, he gets to return to his old life as the star Sirius, but if he fails, he dies at the end of a dog’s lifespan. Dogsbody is an exciting and touching story from the perspective of a dog filled with adventure, hijinks, and more.

The Hounds of Darkness, Shadow, and Light (The Malazan Series) Moving on to more powerful, ferocious, and majestic dogs: the Hounds of Darkness, Shadow, and Light in the Malazan Novels written by Steve Erikson and Ian Esslemont. These dogs are focused, determined, powerful, and savage in battle, and their very presence commands fear, respect, and awe. Each of the different factions of these hounds have an expansive lore that details their origin, allegiances, history, behavior, and more and if we were to talk about it here this article would be much, MUCH longer.

Overall these dogs are sometimes good boys but other times they are a strong force to be reckoned with; no one can blame you if you want to pet them regardless. This Irish wolfhound is the loyal companion of Atticus O’Sullivan in the Iron Druid Chronicles by Kevin Hearne. First appearing in the book Hounded, Oberon has appeared in every book since. Found by Atticus in a rescue facility Oberon now is capable of speaking to Atticus through their telepathic bond. This telepathic bond provides comic relief in the book series where many fans enjoy their back and forth conversation, mostly from Oberon’s incomplete grasp of the English language.

Fond of T.V., hunting, and long stories, this good dog in books and comics definitely provides the heart of the novels.

There you have it, a couple of epic doggos featured in some of your favorite books and comics. Did we miss any? Comment them below!

previous
I Got You A PAW-resent!: Best Dog Gifts
next
4 of the Most Interesting Dogs in History