9 Signs Your Dog is Unhappy

Like humans, dogs are complex creatures too. They experience a wide range of emotions like joy, anger, fear, shame, and even sadness. Yes, you read that right. Man’s best friend gets the blues too from time to time. The cause may come from something general like boredom or something specific like:

“It may be hard to imagine that your chirpy, tail-wagging friend could get the blues; however, dogs are in fact capable of having depression in the same way that humans are,” experts at Canagan say. “Dogs share many of the same neurochemicals that we do and, like us, they are exposed to certain stress hormones like adrenaline and cortisol – so it follows that dogs may experience something similar to human depression.”

But unlike humans, dogs cannot express it directly when they are not feeling too good. The symptoms of depression in dogs can be similar to those in humans, from withdrawing themselves from social situations to being quieter than normal – it can be heartbreaking to watch. So you need to look for signs that your dog is unhappy. Here are 9 of them:

How to tell if your dog is unhappy: Is your dog not eating as much? Are they leaving too much food in the bowl? We know snack time is always a fun time, but too much eating can also mean an unhappy dog. A change in eating habits can be an indication of a pet’s state of mind. Stress and anxiety can lead to a lack of appetite. A drastic change in weight can also mean they are feeling down.

2. Sleeping Too Much or Too Little 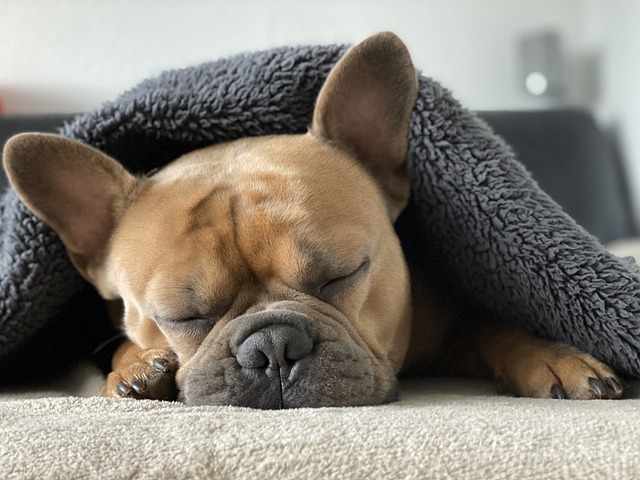 They say let sleeping dogs lie, but what if your dog is clocking in more snooze time than the 12-hour average? If you notice an increase, it could be a sign that your doggy is feeling down. Dogs sleep a lot because they are not getting enough exercise and mental stimulation, which are necessary for a long and healthy life. Snoozing could be a silent cry for help. Plus, insomnia can also occur in pets. It could be caused by physical pain that’s why they are catching some Zzzs.

Similar to us, a loss of interest in things they usually love like toys can be a sign a dog is not feeling fine and dandy. If your dog is unusually unexcited about its chew toy, there may be something wrong internally. It’s common for dogs to lose interest in things sometimes, but not for extended amounts of time.

4. Doesn’t Want to Play or Exercise 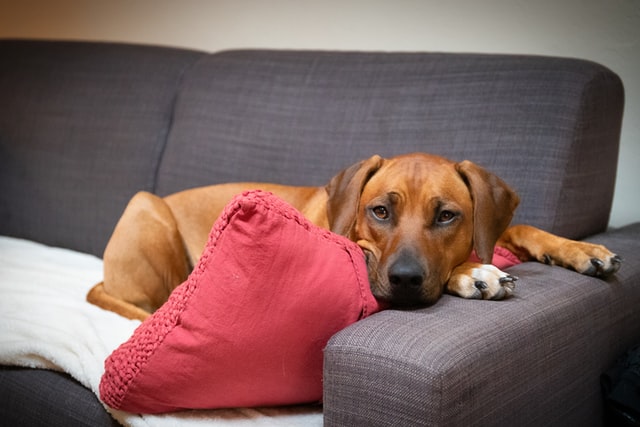 Toys are not the only thing a melancholic mutt may lose interest in. If their energy is low and would not share the same enthusiasm for strolls and playtime is a sign. Professional dog trainer Steffi Trott says: “Depressed dogs have a generally decreased sense of excitement and happiness, and this might show in their refusal to go for walks.” Of course, not all dogs are social and active, so it’s important to note changes in behavior.

If a dog is depressed, they may go and try to seclude themselves by hiding around the house. Dr. Sara Ochoa, DVM, Veterinary Consultant for Dog Lab says: “You may find them sleeping under the bed or in a closet. This is a common sign seen with depressed dogs.” If there’s no presence of a bigger dog or something loud like fireworks, this hiding behavior can be a sign that they’re not feeling well. Similarly, dogs may try to make themselves small by cowering which could mean a low mood. Does your sweet fur baby suddenly start to bark, lunge, snap, or growl at anything that comes their way? There are many causes for this behavior like fear, injury, illness, possessiveness, and dominance. Depression is also another reason that leads to this change in temperament.

We all have seen dogs lick and chew their paws. It’s their way of cleaning up or scratching an itch. However, it’s also possible that they are feeling down and may be trying to soothe themselves. A bored dog might also express himself by chewing on furniture, barking more than normal, or digging in the garbage. “Most people are not aware, but excessive licking (or chewing) can be a way of self-soothing,” says veterinary health expert Dr. Gary Richter. Dogs are a lot like humans. When they are feeling anxious and worried they also pace around the house. It could also mean they are bored and unhappy. It can be annoying when dogs start making a nuisance of themselves, but that usually means they have a lot of built-up energy that needs to be released. Dogs are meant to play and run daily. Sitting inside all day is not part of their nature. Some outdoor time just might do the trick, but if all else fails go ahead and call a vet or animal behaviorist.

Aside from being antsy, another sign of an emotionally unhealthy dog is suddenly being destructive. If a dog becomes rougher than usual it could be a sign that they’re feeling down. Are you spending enough time with your dog? This behavior could be your dog’s way of telling you that they want that tummy rub or run around the block. Increase their level of exercise or mental stimulation to see if their mood improves. If they experience an extended dip in mood, you may want to check in with a veterinarian.

HOW TO HELP A DEPRESSED DOG?

Experts say the first thing that you should do if you suspect that your dog is depressed, is to seek advice from your vet. Sudden behavioral changes can be the initial signs of illness, so it is important to check that these symptoms aren’t happening due to a physical ailment before anything else.”

Our dogs’ body language says a lot about how they are feeling. If you are noticing signs your dog is unhappy, it might be a good idea to speak with your veterinarian and see if a check-up is needed.