Long before she knew the professional hockey team would train a guiding dog for her, Anastasia Pagonis of New York rooted for the New York Islanders.

However, Pagonis lost her vision over the course of two months when she was 14 years old, around the time a small Labrador dog named Radar became the first “Puppy with a Purpose” for the Isles.

“Being a teenage girl is hard, so having that on top of it was just such a struggle for me,” she told TODAY. “It took me about eight months to kind of regroup myself, and then I got it in my head, ‘OK, I’m blind. What will I do for the rest of my life? ” Swimming competitions are the solution. Prior to losing her sight and returning to the sport, the mid-distance freestyler had only been competing for around six months.

“It’s where I feel happy. I feel like I don’t have a disability there, and I think that’s the one place where I feel truly free. There’s just me in the pool when I plunge in, and I feel so connected to it. Pagonis, who is now 16 years old, has amassed a significant number of victories, including two gold medals at the World Para Swimming World Series in Australia just before the coronavirus epidemic put an end to the competition.

Then, when Radar was prepared to serve as a guide dog, she received a call from the charitable Guide Dog Foundation. For roughly ten days due to the epidemic, Pagonis and Radar trained side by side for many hours every morning at her house. Then, on August 19, they formally joined forces. 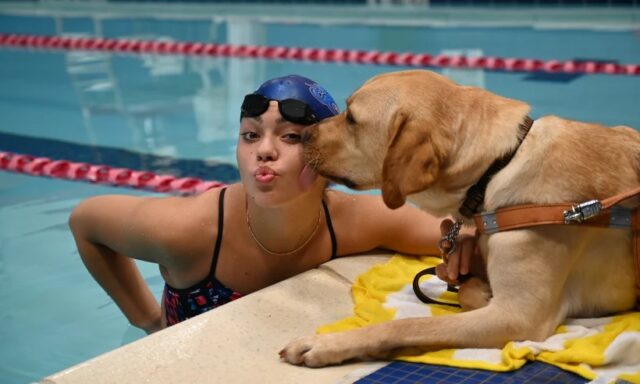 “Having Radar has just given me so much independence and I’m literally in love with him. He’s the best thing ever,” she said. “We’re a match made in heaven.”

Pagonis and Radar recently visited the United States. The kid is practicing with other elite athletes at the Olympic & Paralympic Training Center in Colorado Springs, Colorado, in preparation for the Paralympics in Tokyo in 2021. The clever dog quickly picked up familiar pathways and helped Pagonis navigate the campus after just one week.

“Pretty much if I’m coming from my dorm room, I’ll say, ‘Radar: Forward. Find the elevator,’ and he’ll go down a bunch of hallways and make a few turns and he’ll find the elevator,” she said. “If I didn’t have Radar, I would have to glide against the wall and bump into a bunch of things and it would honestly be pretty impossible for me to find the elevator without asking for help because I have no eyes. So he’s pretty much like my eyes. Radar is a hit with the other athletes, who already know him by name.

“Everyone thinks that he’s the best,” she said. “I feel so blessed that I was able to come out here with some of the top elite athletes in the country. I feel like everyone in the Paralympics is such an amazing fighter and we’re all just awesome.”

She hopes to win gold in Tokyo for her “golden puppy” — and of course, she’s not the only one. 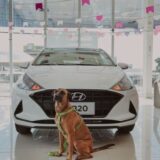 NEXT
Wilbur, A French Bulldog, Was Chosen As Rabbit Hash, Kentucky’s Mayor