After Six Years Of Waiting, A Shelter Dog Was Finally Adopted And Receives The Sweetest Farewell When Stevie was about a year old, he was found wandering the streets and brought to Dogtown SA. He was friendly and gentle with people and other dogs right away. His new shelter companions believed he would soon find him forever home, but sadly, that was not the case.

Stevie was passed over repeatedly for six years, but no one really truly understood why. Elanza Kloppers, the adoptions manager at Dogtown SA, told The Dodo, “[It] was always a mystery to us.” “Stevie met many prospective families, but for some reason, a different dog was always picked. Over the years, a lot of his housemates were adopted, so we never lost hope that Stevie would find a home as well. Being black didn’t help either because black canines are frequently neglected in shelters.

Although it took a while, Stevie and his rescuers never lost faith that his ideal family existed somewhere out there, and they were right. “I could hardly wait to tell the team the news when I finally got the information from the adopter that Stevie was the one,” said Kloppers. They were ecstatic! It finally materialized for our boy. For so long, we have all been wishing and praying. I quickly informed our volunteers as well, and they were shocked by the information. Everyone was filled with joy for Stevie. It was lovely to observe.

When someone finally determined that Stevie was the right dog for them, the team immediately started making plans to eventually adopt him into a forever home. Since Stevie had been at the shelter for such a long period, every one of the staff members had grown to care for him as though he were their own dog. Everyone at the shelter gathered up to say one last hello and goodbye to their beloved Stevie on his final day because they truly wanted to do something special to honor his time there and celebrate his next chapter.

All of our adoptions are unique, but some are truly exceptional, according to Kloppers. “Over the years, there have been one or two adoptions that have truly stuck out, and we have always had a special farewell for those pets. Everyone on the squad wanted to wish him luck and say goodbye to him.

Stevie was so happy as he moved down the row of his jubilant mates. He appeared to be aware that it was a significant day, and he was overjoyed that all of his friends had shown up to bid him farewell. It truly was the nicest day Stevie had ever had.

Kloppers stated, “Stevie wagged his tail and said a particular goodbye to everyone. He has grown to love our team so much, and I believe he was overcome with joy to see all of his favorite people supporting and wishing him luck. For all of us, it was a really emotional day. 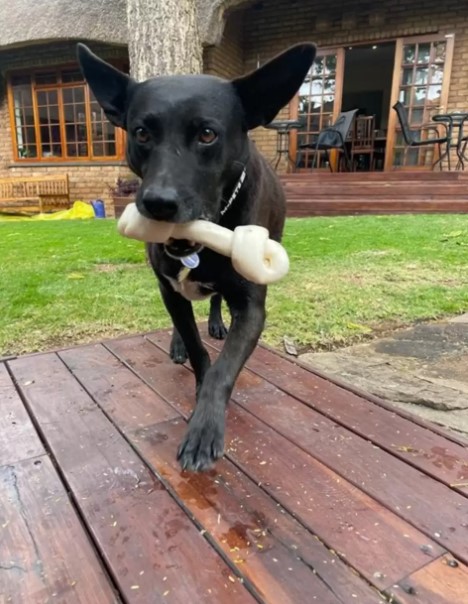 Stevie has finally found his forever home, and thus far, he is thriving beyond belief. His new father calls him Stevie Wonderful and adores him to the moon and back, and it’s obvious that Stevie immediately feels the same way. They travel everywhere together and are eagerly anticipating many more experiences. The entire staff at Dogtown SA couldn’t be happier for Stevie now that he has finally found his happily ever after, even though it may have taken some time. 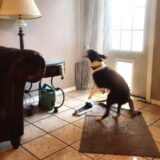 NEXT
Dog Finds The Messiest Method To Beat the Summer Heat