We live in a world chockful of good people. Sadly, it is mixed with others who have no compassion, no empathy, and in this case… no heart.

On an ordinary evening, Bob Hoelter was taking a walk to a nearby store. As he crossed a bridge to get there, he heard whimpering. The cries sounded desperate so Bob knew he had to investigate. He went under the bridge to try and find the source of the cries. What he saw next broke his heart! A frightened puppy was all by himself. The worst part: his mouth was taped shut!

The innocent puppy had been cruelly thrown from the bridge after his mouth was duct-taped by his callous owners. Bob brought him to Griffith Animal Hospital where he received emergency treatment. The medical staff went right to work on the poor dog. They removed the tape from around his muzzle. They then saw how badly the tape had damaged his face. They applied antibiotic ointment and administered pain injections. They then treated him for a broken leg. He would need surgery for that. They set him up in a nice kennel with a cozy bed.

The story of the puppy went viral. When Bob dropped the pup off, he never gave the vet staff his name. He was just focused on getting the little guy help and the staff was focused on saving his life. The puppy found a forever home but everyone was wondering if Bob would ever come forward. Eventually, a family member saw the story on social media and told Bob that his heroic actions were the talk on the internet.

Bob decided he would go visit the puppy, now named Louie. He wasn’t sure if Louie would remember him but dogs have incredibly big hearts and because Bob saved his life, he was forever etched into his memory. 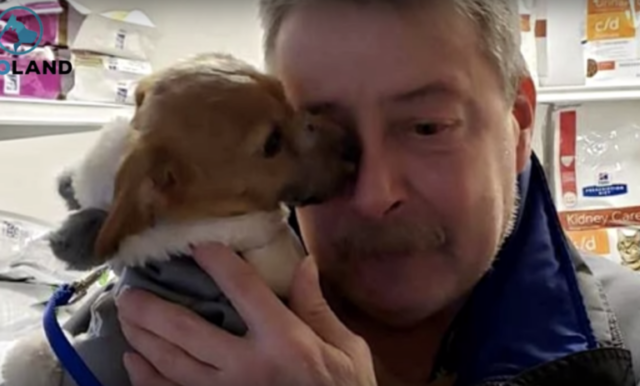 When Louie saw Bob, the puppy couldn’t stop thanking him by giving him the most delicious puppy kisses and snuggles.

The little dog is alive today thanks to this ordinary hero who did an extraordinary thing. Yay for happy endings! Watch the video below to learn more! NEXT
Dumped Puppy Doesn’t Know How To Lie Down And Keeps Tumbling, Finds Comfort In Baby