The going will be tough for this dog.

A Hyundai dealership in Brazil “hired” a stray dog to serve as a “car adviser,” and the dog quickly gained popularity on social media. Tucson was discovered for the first time by Emerson Mariano, manager of Prime Hyundai, roughly two months ago, according to Auto Blog, which quoted the Brazilian publication A Gazeta.

Mariano initially only provided the puppy with food and water, but when Tucson continued returning, Mariano formally adopted him and gave him the name Tucson after the Hyundai Tucson crossover, according to Auto Blog.

The canine is approximately one year old, according to the website. According to Auto Blog, Tucson spends the majority of the day at the dealership, where he has the opportunity to observe meetings, drive, and interact with both customers and employees.

The dog is occasionally shown on his Instagram profile sitting in front of a laptop wearing a headset and has his own employee badge. An adorable dog house for Tucson is being built by employees at the dealership, as seen in one Instagram photo.

Tucson has gained considerable notoriety. As of Friday night, his Instagram feed had more than 139,000 followers.

Mariano reportedly stated that adopting Tucson was a means to uphold the dealership’s pet-friendly policy in an interview with Top Motors Brazil. 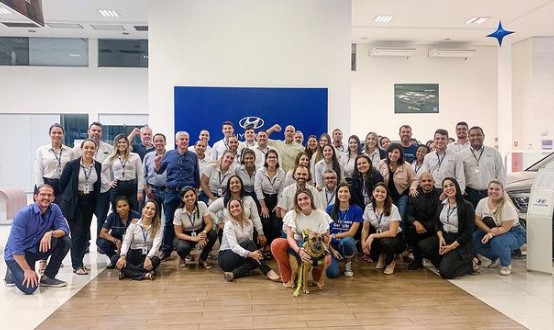 Mariano reportedly stated, according to The Mirror, “The company has always been pet friendly, so now we chose to embrace this philosophy in practice too, having our own pet specifically at a more complex moment like now with so many abandoned animals.”