Whether it’s congenital or because of old age, deafness in dogs should not prevent you from loving them more.

Oftentimes, if a puppy is found to be deaf in both ears, breeders have a difficult decision to make: release the puppy or bring it to a shelter. The sad reality is that many deaf dogs end up in shelters because of the challenges in training them. Also, deaf dogs often get hit by cars, and they can be snappy when they are startled when sleeping, giving the dog breeds a bad name. Issues that a loving and patient dog owner can work around.

Take our story for example, this man decides that learning sign language and teaching his doggo is the way to go.

Somewhere in South Jersey, Cole, a deaf pit bull pup is helping the world hear with their hearts!

Before his adoption, he used to be a pup that was running around a major street with his mom when Animal Patrol picked them up and put them in the shelter. He was passed up by countless families at the South Jersey Regional Animal Shelter because he was deemed “broken.” Eventually, in April of 2017, he met Chris, a public-school music teacher. Their adventure together started impacting lives with Cole’s message. His message is simple and profound: a disability is not an inability, it’s a superpower!

Chris mentioned that they don’t really know Cole’s backstory, but it was more than okay, their focus is moving forward. He also mentioned that his nephew was deaf as well and he noticed a very important similarity between Cole and his nephew, they literally just live their life and do what they do the way THEY do it.

Cole amazed Chris with his keen ability to respond to sign language and seemingly endless capacity to show tenderness and love. With the help of his nephew, Chris learned how to sign language and it is their main way of communicating with each other, as well as lip reading commands.

Cole is a full-time therapy dog at the school Chris works at, Dr. Mennies School. They became the inspiration for launching a unique social-emotional learning program in the South Jersey school. Cole’s message started inspiring many others as his story made national news publications and became the catalyst for the Team Cole Project, where Cole and Chris have presented school assemblies all over the Tri-State area. Along with Chris’ nephew, they have taught children that it is okay to be different. It helped students recover courage and self-respect, and inspired acts of kindness throughout the community.

He’s a dog that’s very in tune with emotions and has a way of finding the kid that needs some extra comfort that day. Their program helps students reflect on personal feelings of “brokenness” in a new and self-empowering way, and leaves an impression of acceptance and compassion that youth can take with them for years to come. Outside of the classroom, in their first two years as a therapy dog program, The Team Cole Project has volunteered over 500 hours and received the Presidential Silver Service Award.

Cole quickly became a beloved companion among the residents of the NJ Veterans Memorial Home, who unanimously petitioned for him to be named their Official Mascot.

In all the places he goes to visit, Cole displays three very distinct personalities and modes. When they’re doing hospice work, he’s very cuddly. He lays his head on their chest and melts in their arms. While with veterans, he’s a bit more energetic. But in the school where Chris works at, Cole becomes a superhero dog.

In August of 2020 the Team Cole Project did its first ever “Kindness Tour”, visiting care facilities throughout New Jersey to bring joy and hope during the Covid-19 pandemic.

Despite all of this good work, there’s still some preconceived notions and prejudice. Some buildings or facilities would refuse to let Cole in, solely because he was a pit bull. But they don’t take that to heart, they leave and learn from that experience.

For more information about Team Cole Project, you head on over to their website.

Deaf dogs are just like hearing dogs in all other ways. When we discover that a dog is deaf, or if we are considering adopting a deaf dog, it is important to sort through the misinformation to learn how to best live with a deaf canine companion.

Care to stay for one more inspiring story?

Meet Joan Jet, a deaf dog that was just misunderstood. 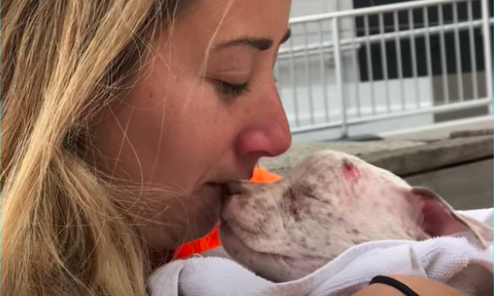 According to her foster mom, Arianna Pomo, the pup could not stay at the shelter she was working at anymore. On her way home, as she was clocking out, this pupper just plopped down on her arms. As she was observing the pup, she noticed how it had wounds of an unknown origin on her face, and because of the current state of the pup, the shelter said that she couldn’t stay there anymore. So, without any hesitation, Arianna took JJ home. At that time, Arianna had no idea that JJ was deaf. For the first week or so, the pup would sleep on her chest. Joan Jet was so fragile and it scared Arianna thinking that the pup would not make it. But, slowly the pup did start to heal physically. Being so preoccupied with taking care of JJ, Arianna didn’t immediately notice that something was different about this dog. Despite loud claps and banging on the table, Joan Jet would not budge – that’s how she figured that the pup was deaf. As far as they knew, she was born that way.

“She can feel the vibrations. She can sense the vibrations. There are some decibels in the higher or lower frequency that she may end up developing the ability to hear in some capacity.” Arianna says. As they waited for JJ to find her forever home, Arianna made sure to train her and teach her hand cues to communicate and thrive with her future family. She’s even willing to offer to teach them for free if they live near New York City.

This entire journey with Joan Jet made Arianna realize that training a dog who has to overcome the world in a different way, will also change the perspective on how you view the world. It reached a point where she’s seriously considering specializing in training deaf and/or blind dogs. 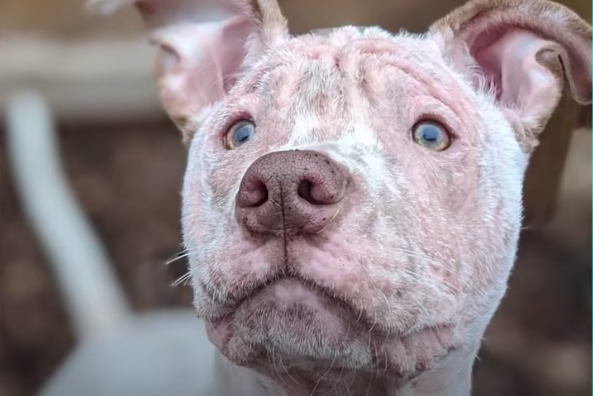 “She just wants to make friends and I think that’s her superpower,” she adds.

Dog adoption for deaf dogs or ones with a disability does not mean less love and happiness. Their resilience makes them incredibly special and will create a beautiful bond between you.

For more inspiring stories, feel free to browse our website and share it with a fellow dog lover!