Daisy, an 18-month-old Dutch Shepherd, has not had an easy life thus far. She was found tied to a trailer in South Carolina, so dehydrated and emaciated that she was too weak to stand.

Pet Haven, a rescue organization in Minnesota, took her in to live with a foster family until she was adopted, but her journey did not get any easier from here.

Daisy was extremely terrified and would barely come out of her crate. Whatever horrible things she had endured in her past were definitely still affecting her.

Finally, after three weeks, Daisy was feeling comfortable and less afraid and was ready for adoption.

Her new parents, Barbara and John Andrews of Apple Valley, adopted Daisy to be a companion for their senior dog, after their other pet sadly passed away.

Although Daisy had fit in perfectly with her new family, things would still not get any easier.

Daisy ended up getting spooked at something, hopped over the fence in the backyard and ran off, which caused her family to become immediately worried. Due to Daisy’s past abuse, they knew that she would be terrified out on the streets by herself. And to make matters worse, a snowstorm ended up hitting Apple Valley right when she got out.

Daisy’s parents, along with 600 other people, spent the whole day and night searching for Daisy. While some people did spot her, they weren’t able to get close enough to her to grab her, since she was very scared. Someone had even witnessed Daisy fall into a lake before managing to climb back out onto the ice.

The next morning, a miracle happened. John looked out the window and saw their dog playing with another dog. It was Daisy! Daisy ended up finding her way back home and dug herself back into the yard.

Daisy was happy to be back home safe, and her new family is beyond relieved. They say they will now keep a close eye on her to make sure this never happens again. 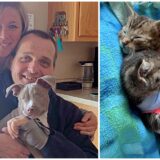