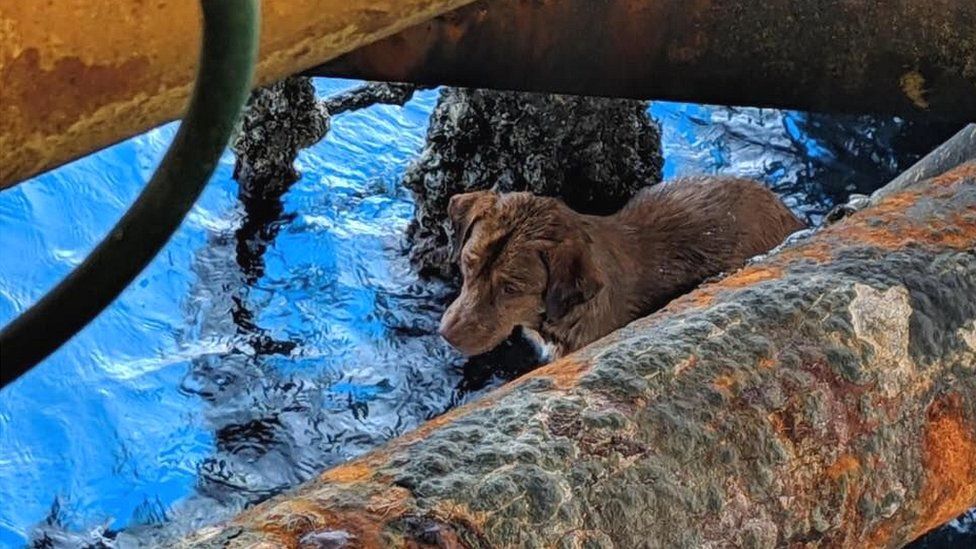 Oil rig workers found a shivering dog swimming on the afternoon of April 12 some 135 miles in the Gulf of Thailand with no indication he knew how he got there.

According to a Facebook post made by Vitisak Payalaw, an offshore planner of Chevron Thailand Exploration and Production, the brown canine was found swimming toward the rig platform and trying to cling to the support structure below deck.

The workers who spotted the dog tried to hold out a pole to rescue him, but the waves were too erratic for him to get a good grasp on it and was unable to make the climb.

Payalaw wrote, “I thought that if we didn’t move quickly, I would not be able to help him. If he lost his grip, it would be very difficult to help him.”

The crew decided to use a rope and managed to secure it around the dog’s neck to haul him up. In an interview with CNN, Payalaw described how the dog didn’t whimper or bark, but held on silently while looking up at the workers.

“His eyes were so sad. He just kept looking up just like he wanted to say, ‘please help me,'” he said. “At that moment, whoever saw this, they would just have to help.”

Once on board the platform, the workers quickly bathed the dog and gave him fresh water and an electrolyte to drink. They then named him Boonrod, which means ‘survivor.’

“He looked extremely exhausted and ran out of energy. He didn’t move much,” Payalaw further shared in his interview with CNN. “He was shaking and he couldn’t stand, he had to sit all the time.”

Payalaw shared that the dog might have fallen off a fishing trawler. They were lucky to have found him that day because if there had been huge waves, it would have been difficult to rescue Boonrod, or worse,  the dog would not have been visible.

At around 10:00 am local time on Monday, Boonrod – who was identified as an aspin, a breed local to the Philippines, was lifted by crane and onto a passing oil vessel to be taken to the mainland.

Boonrod has been taken in by the charity Watchdog Thailand, and was sent to an animal clinic in Songkla province in southern Thailand.

Payalaw shared that Boonrod will be given temporary shelter at a dog home until he can regain his strength. And adds that if no one comes in to take the dog, that he would adopt Boonrod.

Advertisement
Advertisement
ADVERTISEMENT ×
previous
Dog to the Rescue: Dog Saves Woman from Getting Robbed
next
Dog Spent All Her Life in A Filthy Garage, Finally Rescued