We all know and love the adventures of Clifford the Big Red Dog. When the first Clifford children’s book was published by Scholastic in 1963, he instantly became a fan-favorite! Soon after, the Clifford series became one of the biggest dog news stories out there and it was immediately adapted into TV series and films. In other words, the big red Labrador Retriever became every kid’s favorite giant pooch!

Clifford is primarily known for his other-worldly size, but who says there aren’t enormous dogs in real life as well? This article takes a closer look at the giant Clifford-esque doggos today. The Great Dane has been universally recognized by many canine experts to be the tallest dog breed in the world. While they aren’t the heaviest dogs out of the bunch, they are certainly among the tallest: they stand at around 30 to 34 inches tall!

Great Danes are known for being playful and loyal to their owners, and they were first bred by Germans as hunting dogs in the forest. In fact, the tallest dogs to ever exist are Great Danes named Titan and Zeus. They stand at a whopping 42.5 and 44 inches tall!

A friendly advice from one dog parent to another: Don’t let your Dogue de Bordeaux lay down on your bed, or else you won’t ever be able to sleep there again!

The English Mastiff breed descended from ancient war dogs who battled wild beasts and gladiators in Ancient Rome, and later on were used as hunting dogs to battle big game in medieval England. Nowadays, the English Mastiff has been recognized as the “Mastiff” by the American Kennel Club, and it mainly goes to war with the couch, the shower, and the veterinarian. They are known for warming up to their owners quickly, and therefore they make the perfect family members!

The English Mastiff may be good bois, but they are Clifford-like in size as well! They can grow up to 30 inches tall and weigh an astonishing 150 pounds!

If you thought the pooches on this list were huge, wait until you see the Tibetan Mastiff. I mean, this pooch is just built like a tank! Standing at 26 inches tall and weighing at an absurd 100 kilograms (yes, you read that right!),  this giant mastiff has been utilized by the Tibetan nomads to guard monasteries. It was originally found in the Himalayan highlands and has since evolved into a perfect companion for humans.

While Tibetan Mastiffs are not recommended for new dog parents, they certainly provide a huge fluff of joy when you have them around the house. When they get accustomed to you, they make for perfect partners on National Doggy Date Night— just make sure you have the time and money to take care of them!

These four pooches have made the headlines for dog news stories because of their Herculean size, but they are just as loving as any other pooch. After all, who doesn’t want to cuddle up to a thicc boi? 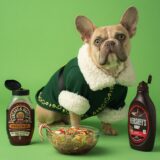