As a new parent, it’s normal to be fearful for your child’s safety — questioning every move and whether your dog has the right personality type that will mesh well with having a baby. Here are some ways you can train your dog, but you can also help your child get used to the idea of coexisting with a pup after you assess the safety of the situation.

Don’t worry because when people say that dogs are man’s best friend, they are not wrong. These lovely canines have become a significant part of our families and provided us with unconditional love throughout their lives. As gentle and empathetic creatures, most dog breeds are also capable of protecting our kids — some even offer the possibility of a childhood friendship that will last a lifetime! But which breeds have the best dog personality types to live with and protect our little kids?

There is no doubt that doggies can bring about pawsitive reinforcement and protection for our little ones, so let’s take a quick look at the best breeds for them! Border collies were originally bred to be working and herding dogs — they’re as active, loyal, and hardworking as any other pooch, making them one of the most popular domesticated pets in the world. Little do people know that collies likewise show more empathy towards newborn children, and for this reason, they were given the nickname “caregivers”.

The border collie’s biggest strength is its flexibility to adjust to new people, rules, and environments. As a family pet, they act just like a second baby who can grow together with your child. 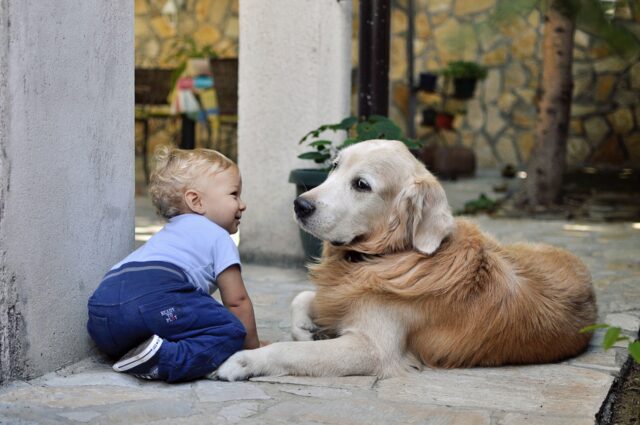 Golden retrievers are well-known for being extremely loyal and playful pets, no doubt about it. Not a single day goes by that goldies don’t exude youthful, vibrant energy when they spend the day with their hoomans…including kids! Veterinarians often recommend goldies for bigger families, as they can grab the attention of little kids without any problem.

Goldies are also patient enough to deal with toddlers who would give them endless amounts of fur and tail scratches. Simply put, golden retrievers are paw-some companions for your toddlers! When first-time owners do their research on dog breeds, they would quickly notice that the poodle doesn’t have the best dog personality. Poodles can be as adorable as they are aggressive — when you get on their bad side, they would immediately show signs of disdain and disobedience. With kids, however, a poodle’s behavior goes full 360! They go from sassy pooch to an infant’s best pal with adequate care and monitoring.

The poodle is also known for being an intelligent breed of dogs that can easily adapt to both young and old members of the family. They’re certainly smart enough to realize that they’ll receive more treats if they are kind to the infants! This fact may come as a surprise since they are known as “Hound dogs”, but Beagles are actually really great around children. By nature, this breed has a bubbly yet protective personality which makes them the perfect balance when being around children all the time.

Because Beagles were bred to be in packs, a pup will be like a playful shadow that always follows your children around no matter where they go. Having said that, Beagles are hyperactive and need tons of exercise and walks so this is best for outgoing families who love walks in the park. Love beagles? Read more about them here. Bulldogs may always look furious, but their personality is far from that because pleasing them is quite easy. Once they have all their basic needs, they’re going to be content. They have a generally calm and gentle disposition so a playful child won’t annoy them easily. In fact, they will probably enjoy playing with them since this breed sure loves making friends!

It’s true that they’re prone to health problems as well, so frequent short walks can double as quality time with the children and a preventive measure for obesity. If you have a family that’s just mildly outgoing, a Bulldog is your best choice. The Labrador Retriever is a common breed for a good reason: they can adapt to any environment fairly easily. Labradors thrive in any given situation and can even play many roles such as being therapy and guard dogs. They are gentle, playful, and friendly —  all the qualities one ought to have in order to be around kids.

Young labs are hyperactive and would always want to play or go out, but they become relaxed after the age of 3. If the duality of dog personality is something you’re up for, then you’re in it for a treat! Nonetheless, you will never go wrong with this kind-hearted cuddle buddy. Originally bred as large working dogs for fishermen in the Dominion of Newfoundland, the Newfoundland Dog has evolved from merely being a hard worker to a multifaceted canine capable of doing many things. These large-sized canines are fairly known for their excellent swimming abilities, so they are now currently being used as rescue dogs. But above all, this breed possesses unwavering loyalty to its owners, and can be extra loving (sometimes overprotective!) to babies!

The Newfoundland dog, now called “Newfies”, is sometimes even referred to as a “nanny dog” for its innate ability to care for its children. Its combination of a sweet temperament and a fairly gentle disposition is a hallmark trait that not many canines have, so definitely consider having a Newfie in your home!

While there are certainly other pups with the best dog personality types for babies, these three doggos are your go-to breeds to ensure that your kid is protected by a lovely canine. The last thing you’d want to happen is to add more to your stress at home. Introducing a new dog that doesn’t match your baby’s energy will cause problems in the long run!

Advertisement
Advertisement
ADVERTISEMENT ×
previous
It's a House Party: The Ideal Dog Breed Characteristics for Multi-Pet Homes
next
Preparing for De-BARK-ture: A Dog Training Guide for Your Next Road Trip