Concerned about your dog’s swimming safety? One pair, however, has thought of a brilliant solution to make sure they don’t lose their pet in the sea.

A pulley attached to the boat owner’s Nova Scotia Duck Tolling Retriever, known as “Tollers,” is seen being raised out of the water in a video posted on TikTok on August 5 by user @grantcameron16.

The bewildered dog tries to continue swimming while twisting its paws in the air as Grant reels in the pulley. After safely landing on the deck, the dog walks over to his mother.

The Nova Scotia Duck Tolling Retrievers are natural swimmers, according to The Toller Club. They have webbed feet, just like Labrador Retrievers, which makes it easier for them to float through water. Due to the breed’s loyalty and intelligence, it has been utilized to hunt waterfowl throughout the years.

Despite Tollers’ exceptional swimming abilities, one can never be too careful when taking animals onto a boat. A dog that was lost at sea in July eventually found his owners after swimming nonstop for two days. Josie, who was sailing with her owners to Ibiza when she fell overboard during a storm, swam 120 miles to safety. Zuko the dog, who had jumped overboard while attempting to “bite” the waves, was later discovered swimming alone in the middle of the ocean. Fortunately, he was seen by another boat, and after they called the number on his collar, they were able to locate his owners.

The first step in keeping your dog safe onboard, according to Jennifer Fish, proprietor of the Dogs Gone Swimming Wellness Center in Portland, Oregon, is to get them a properly fitted life jacket.

She advised The American Kennel Club that a dog’s life jacket must be in good working order to prevent drowning incidents and that it must snugly fit around the animal’s neck to prevent legs from being entangled in the water. Before taking your dog out on a boat, Fish advises introducing them to the sea in a spot with “calm, tranquil water with a softly sloping bank.”

She recommends people to “bring your dog’s favorite goodies and toys and be prepared to get in the water yourself.” Once onboard, make sure your pet has access to plenty of water, food, and a place to relieve himself. Remember to keep an eye on your dog because they might want to jump in, especially if they’re playful.

Instead, she advised, “try to divert the dog’s attention with a toy.”

The dog’s amusing reaction captured the attention of TikTokers, as seen by the clip’s more than 164,000 likes and nearly 2,500 shares. PREVIOUS
“My Dog Isn’t Lonely At Home”: Adorable Doggy School Bus Picks Up Pups Every Day And Takes Them To Daycare 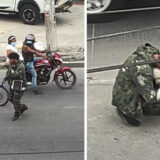 NEXT
After Being Ignored, A Struggling Street Performer Is Given A Warm Embrace By The Dog