Detection dogs tend to get attached to their trainers, and Bei Bei, the German Shepherd, is no exception. After months of training and years on the job together, it makes sense that dogs emotionally bond with their trainers. Millions of people recently witnessed a heartbreaking separation between Bei Bei, the dog, and his beloved trainer. It was time for the man to retire and leave the barracks, but the canine was not prepared to let him go.

The trainer gently grasped his beloved dog’s face in his hands and told him it was time to part ways. Poor Bei Bei must have understood what was going on because he immediately showed reluctance to let the man leave. The 7-year-old dog worked on a number of rescue missions, including helping to find people after major earthquakes in China. After saying goodbye to the dog, the man got into his truck and pulled away. Not only did Bei Bei run after him, but he hopped up into the truck.

Sweet Bei Bei ran for more than 3,300 feet chasing after the truck before he finally realized they had to part ways. Bei Bei sensed his trainer would no longer be a part of his life, and he even tried holding onto the officer’s duffel bag. According to the Daily Mail, even though the officer bent down to give his dog a kiss before departing, Bei Bei wouldn’t let go. Eventually, with tears in his eyes, the man had to ask the other trainers to take the dog away.

Zhang Wei, the retiring sergeant, had no idea so many dog lovers around the world would fall in love with Bei Bei. He held back tears as he walked away but no one could explain to Bei Bei why his best friend was departing. Dogs can be very in tune with their human’s emotions, and you can witness this poignant video below. 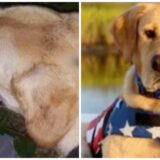