A little brown dog wandered the streets of Bali, Indonesia, looking for shelter. She found a hole that was just big enough for her and entered it. It was the start of a drain pipe that was located next to a busy street.

The dog, who was eventually given the name Charlie, wished someone would see her. Sadly, the temporary residence she had chosen wasn’t doing any good. Charlie’s hazel eyes were peering out from the curb, but most automobiles were moving too quickly to see them.

Her luck soon turned, though.

Charlie’s mother, Aubrey V. Lynn, said, “I was at home working, and my partner was headed to the gym, leaving our neighborhood, when he saw her. He kept driving past and knew he couldn’t just leave her, so [he] turned around and sent me a message.” Lynn was moved to tears and inspired by Charlie’s condition; she was saddened that the puppy was abandoned but also eager to lend a hand.

Lynn and her partner realized the rescue had to be done cautiously since they didn’t want the puppy to unintentionally dart into oncoming traffic.

“We both felt really anxious because sometimes she would come out of the hole,” Lynn said. “But she wouldn’t let us get close enough to catch her.”

To tempt Charlie out of the drain, the two went to a nearby pet store and purchased dog food. Next, they waited. The puppy remained immobile for more than 24 hours. Lynn added, “We sat there for hours trying to grab her. She wouldn’t come out, so we went to leave, getting back on our scooter, and she ran right up to us.”

The puppy, who had been so aloof, quickly calmed, as though instantaneously comforted by a tender touch.

“She calmed immediately and didn’t try to get away,” according to Lynn.

Lynn brought Charlie home with her. Although they hadn’t wanted a puppy, it didn’t take them long to realize they were in love. “We never talked about it while trying to rescue her, because our focus was just getting her to safety, but I think both of us knew in that moment that she was a part of our family now,” Lynn said.

Charlie acclimated without any issues despite not having spent a lot of time around people or in the security of a home. She appeared to be aware that she was at home. 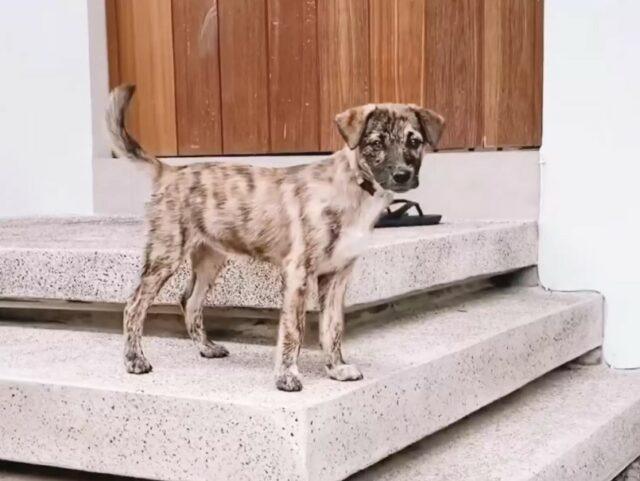 “[Charlie] adapted really well,” Lynn remarked. “We let her sleep and eat in safety for a while and then the first time we went to sit with her, she was timid but warmed up so quickly. You could tell she just wanted to be loved — it was really sweet.”

Lynn and her partner can’t help but wonder at how well Charlie fits into their lives as they run about with Charlie in their yard and play fetch. This two-person family has expanded to a three-person family, which they had not anticipated.