“My Dog Isn’t Lonely At Home”: Adorable Doggy School Bus Picks Up Pups Every Day And Takes Them To Daycare Many people think of being surrounded by puppies of different sizes and kinds who are eagerly waiting for their pets when they envisage Heaven or Paradise. Some people have created a version of heaven on earth by doing this and surrounding themselves with content K9s. Arat Montoya, a resident of West Linn City, Oregon, is one such person.

Arat was raised in Mexico and, at the age of 15, he relocated to Canby. He told The Oregonian, “My dad wanted me to be a baker because my family is a family of bakers. He worked at the Dog Club of West Linn, a dog daycare facility, but after it closed, he continued working with a few clients, boarding and dog-sitting out of his home. “I said, ‘I’m sorry Dad, I love dogs,'” he recalled. In an effort to better provide for his expanding family, Arat started Doggie School Bus Inc. in 2016 as a dog daycare facility. In the morning, he would arrive at a client’s home to pick up their dogs in a distinctive yellow vehicle known as the Doggie School Bus.

Then he would take them to a 5-acre estate he was renting from a friend. The dogs would spend the majority of the day here, engaging and playing with Arat and the other puppies. The man drove the dogs back to their owners when school was out for the day at 2 o’clock. Each puppy had to pass a temperament test in order to join the pack, and the entire day of puppy play cost $30 at the time. The brilliant marketing concept soon gained popularity.

The concept quickly gained popularity in his town, and customers soon began to arrive. “I acquired 16 clients in just two weeks. People were going crazy,” he recalled, telling The Oregonian with nostalgia. He had to purchase bigger, larger cars to pick up and transfer the puppies since demand increased so great. 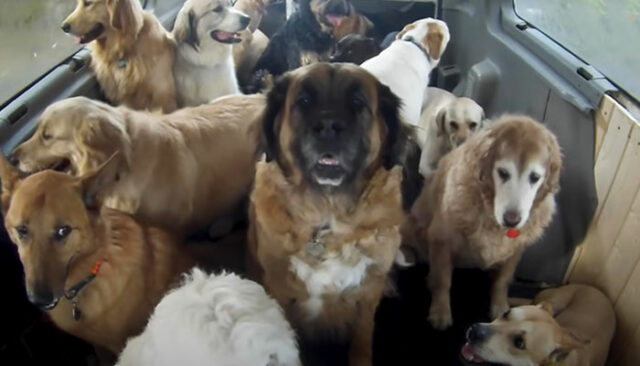 When they hear the guy drive up, several of the dogs immediately leave their homes and board the bus because they are so excited to attend to “school.” He had more than 300 clients in 2019 and would have to take care of about 20 puppies every day. The company of the dogs, who like playing and interacting with one another, is, in Arat’s opinion, the best part of doing all of this. He is familiar with the names of every dog and can tell most of them apart just by their bark. He proclaimed, “I’m the happiest man in the world doing what I’m doing.

Arat’s Facebook page currently has 33K followers, and his services are still available.

These doggie daycare “schools” keep popping up, and we hope that there’s no stopping them any time soon! PREVIOUS
My Traumatized Rescue Dog Enjoys Being In Flower Fields, So We Take Her To Every One We Can Find