Through their yearly Salute To Service campaign in November, the Green Bay Packers and Fleet Farm pay tribute to veterans and active serving service members.

Aaron Jones, the running back for the Green Bay Packers, was present to inaugurate the event and to recognize several distinguished guests who support injured soldiers.

Aaron Jones, who has been the Packers’ representative for the entire month-long campaign, adds, “It’s just a blessing. I feel like it’s coming full circle and I’m honored.”

“I’m meant for this. I’ve been groomed for this. I grew up in a military household, being both my parents were in the military, my brother is in Air Force now. I just know kind of firsthand what the sacrifices military families make the hardships that they go through,” Jones says. Joshua Zenner, a retired Master Sergeant in the Army National Guard, is all too familiar with hardships.

According to Zenner, “I had been going through some struggles getting help with therapy and counseling and groups and stuff, and I wanted to try something else.”

Zenner left the Army National Guard after 20 years of service.

He suddenly realized he needed assistance. The Packers Salute to Service non-profit partner for this year, Patriot K9s of Wisconsin, was contacted by Zenner.

Patriot K9’s of Wisconsin executive director Lani Rethaber states, “We are a small organization still however, we do have a good impact on central Wisconsin.” 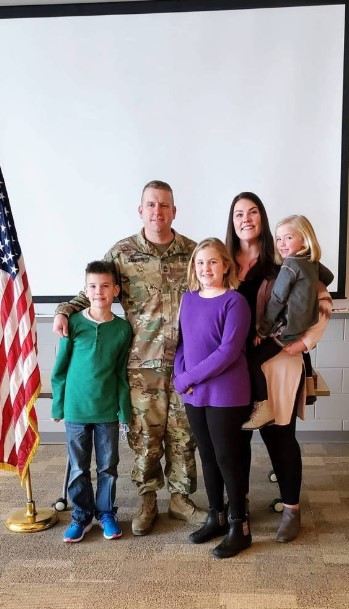 “We don’t just hand them a dog and say, ‘see you later.’ We bring them all into the fold. We are a family. We are a unit. It’s like being back into the military. We take care of each other,” she says.

“We do provide psychiatric service dogs for disabled veterans for free. We are a free organization. Our veterans are part of our family long-term. So after they graduate from our program doesn’t mean they are gone. We follow up with them for the life of that service dog.

According to Joshua Zenner, who was matched with his service dog, Riggs, “What’s so great about this program is that it’s the handler and the dog. They’re not training the dog to give to the veteran. It is 100% the student with the dog.” The two finished the training course designed to assist Zenner to manage his anxieties.

“The sense of accomplishment by completing the program was something I haven’t had in a long, long time,” Zenner says.

Having Riggs with me just gives me something else to focus on even though he’s focusing on me, watching over me. Just having to take care of a dog takes your mind off so many other issues or problems,” he continues.

To determine whether the Patriot K9s of Wisconsin program is appropriate for them, Zenner urges other veterans who might be experiencing mental health issues to get in touch with them.

“The classmates that I graduated with and their dogs, I mean they were family. I just say if you are having an issue don’t hesitate, just call.”