‘Piglet-Looking’ Dog Completely Transforms A Month After Leaving The Shelter Chrissy Elder frequently visits her local shelter in Charlotte, North Carolina, to accept some of the neglected stray animals because she is accustomed to assisting animals in need through Forgotten, Now Family Rescue.

She recently noticed a small puppy by the name of Piggy, and she immediately realized that she needed to take immediate action to give Piggy some hope and the best opportunity for a new life. “As I was at the shelter, they said there is another [dog] in a kennel in the back,” Elder told The Dodo. “He was so sad and in terrible shape.”

Piggy spent five days in the veterinary emergency room after Elder helped him escape the animal shelter so that his terrible skin condition could be treated.

“He went to a foster home and received medical baths three days a week,” Elder said. “He also received two rounds of antibiotics to treat an infection.”

With a lot of TLC, Piggy’s showing signs of hair regrowth, and Elder thinks he might soon be looking forward to a full coat of fur.

“We are seeing some cute little patches coming in now,” Elder said. “We do not believe he will be [in this condition] forever.” 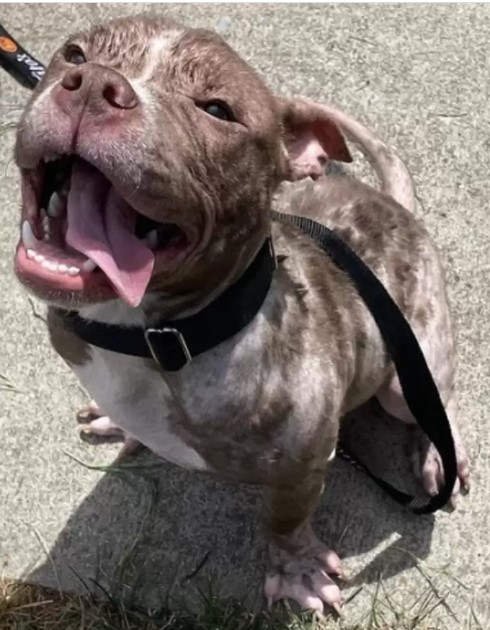 Even after all of that, Piggy is just grateful to have a second chance at life.

“He’s the sweetest baby,” Elder said. “He has no idea how mean the world has been to him. The first day, he did not even want to stand up. Now, he runs and plays. He is so happy with his little piglet-looking ears flopping in the wind and excited to meet everyone.”

Now that Piggy is on the mend, he’s looking for a forever home. The only important requirement: must love floppy ears.

To adopt Piggy or one of his friends, visit Forgotten, Now Family Rescue.
Return to facebook
1