Animal rescue organizations frequently need to think outside the box to locate cats and dogs in their forever homes. Joining forces with nearby companies is one of the most efficient approaches. That’s exactly what the Niagara SPCA did, and the results were incredible. The Niagara Falls, New York no-kill shelter has gained notoriety after collaborating with the Amherst Just Pizza & Wing Co. franchise in an effort to aid in dog adoption. They came up with an incredibly great idea jointly. They made the decision to place flyers with pictures of dogs looking for new owners on pizza boxes. The heart-melting campaign proved to be a success. Not only did the customers enjoy seeing adorable puppies on the pizza boxes, but the adoptable pets also caught the attention of many potential owners. Anyone who adopts a dog from the pizza restaurant will receive a $50 gift certificate as a way of welcoming them as a new pet owner. Alloy was thrilled when Kimberly LaRussa, the event coordinator for the shelter, asked her what she thought about printing pictures of animals on pizza boxes. She then set to work making it happen. Both the pizza business and the shelter received acclaim for their creativity after the campaign soon went global.

The first puppy was adopted by a devoted family on the day it was launched. I hope more dogs are as fortunate as him! 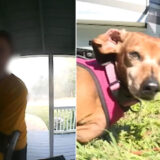