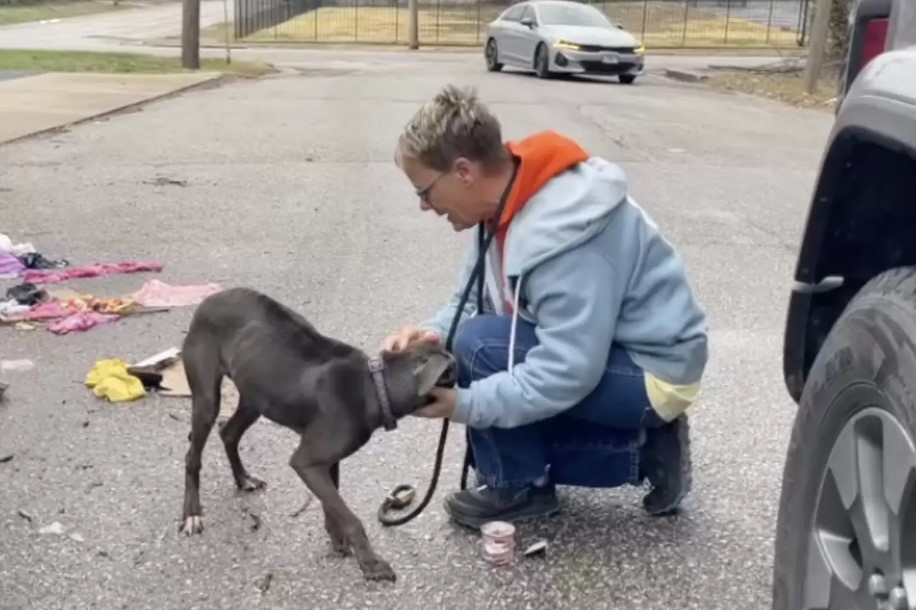 In Missouri, a Good Samaritan saw a puppy resting on a trash heap a few days in a row and decided to call for assistance. He made a call to Stray Rescue of St. Louis (SRSL), and their team of rescuers headed out right away to save her.

The puppy was first noticed by Donna Lochmann, the chief lifesaving officer for SRSL.

“When we got there, she was still rummaging through the trash because she was hungry, and we could see that she was skinny,” Lochmann told The Dodo.

When the dog first didn’t notice Lochmann, she immediately began to hide under the trash can. Lochmann understood that she would need to win the puppy’s trust in order to save her. She thus took a look at the dog’s hunger before taking a treat out.

“She was very receptive to the sausages,” Lochmann said. “But when I knelt down and offered one to her, she went past the food and came right up to me.”

The adorable dog moved as near to her rescuer as she could and locked eyes with her instead of chewing on the food that was being presented to her.

“It was as if she was saying, ‘Are you here to help me?’” Lochmann said. After gaining the dog’s confidence, Lochmann led her to the car while wearing a leash around her neck.

You can watch the rescue here:

The puppy, which Lochmann dubbed Little Toes, immediately won the hearts of every employee at the shelter as soon as they arrived.

“She was so sweet with everybody in the clinic,” Lochmann said. “She was pretty much hugging up on everybody.” Little Toes was only at the shelter for a day and a half before being placed in foster care, but during that brief time, she made sure to show as much affection as she could.

Little Toes now spends her time pampering her new foster parents and canine sibling. Now that she is in a secure and caring temporary home, her sweet personality is developing more and more every day.

The fact that Little Toes will never go hungry makes her friends at SRSL happy, even though they miss her hugs.