Today’s best rappers might be known for spitting rhymes in the studio and releasing chart-topping tracks, but like many of us, they are also fond of dogs. After all, they’re cute, drama-free, and always love to give a good cuddle— and for this reason, these famous celebrity dog owners aren’t shy to show their obsession for their doggo babies.

Just as you browse through Instagram, you will notice a growing trend of how rappers flaunt their four-legged best friends. Let’s take a quick look at how these famous people and their fogs became a living testament that no matter how tough a rapper may look like on the outside, their hearts also flutter when they see their loving doggos. It’s only fitting to start this list off with a rapper who’s actually named himself after man’s favorite pooch. Famous for hits like “Drop It Like It’s Hot”, “Gin and Juice”, and “Woof!”, Snoop Dogg has cemented himself as one of hip-hop’s greatest icons. Little did we know that Snoop Dogg has a dog of his own—a gray French bulldog named Juelz Broadus. He even has his own personal Instagram account, where we could have a first-person POV of Juelz’ adventures with his hooman (or fellow dog?) Snoop Dogg. 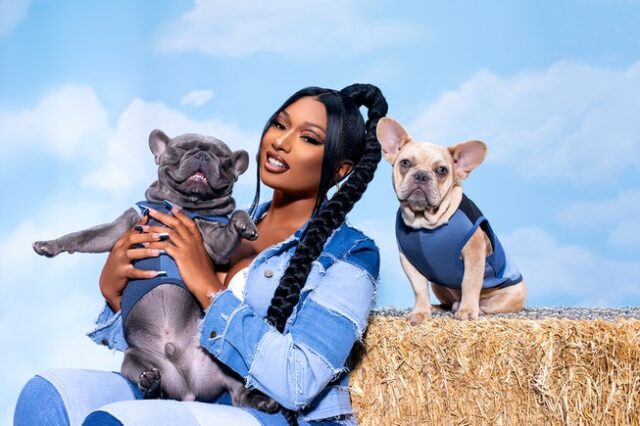 Hot Girl Meg quickly became a hip-hop sensation last year after her recent music hits, “Savage” and “Hot Girl Summer”. While she mostly flexes her money and jewelry in her songs, she is also a proud dog mom to five good bois. Her first dog, a pitbull named 5ive, isn’t really shown much on social media, but he has proven to be an absolute sweetheart. Megan’s “second-born”, a French bulldog named 4oe (pronounced as “Foe”) Thee Frenchie, is the most well-known pooch among the bunch. He now boasts nearly 500,000 followers on Instagram!

Between May and December 2020, Megan adopted three more wonderful doggos: two more Frenchies, as well as a Cane Corso pup named X! How’s that for a dog family?

Portland-based rapper Aminé made a name for himself when he released “Caroline” back in 2017. The song amassed over 300 million views on YouTube and was a certified bop for its time! If there’s anyone who can outshine Aminé on his own Instagram feed, it’s his adorable Labradoodle, Oliver.

Oliver is basically a giant teddy bear that regularly appears on Aminé’s social media profiles (and in music videos, too!). His cute curls and adorable face make him an internet star in his own right. There’s no one way to describe the multifaceted artist that Drake has become. He is an all-around music virtuoso who sings, raps, and produces songs! From “Started From the Bottom”, to “God’s Plan” and “Hotline Bling”, Drake has undoubtedly become one of the most prominent music legends of his generation.

Enter Diamond, a black-and-white Akita who has a charming gaze and who also happens to be Drake’s dog. Diamond made his (or her) first appearance on Drake’s digital booklet for his 2016 album Views, standing confidently beside its owner. Famous people and their dogs seem to exude a similar persona, and Diamond is surely one to look like a hip-hop superstar.

While there are lots of other famous celebrity dogs that we can include in this list, these puppers definitely caught our eye. They’re sweet and lovable canines who are also living the thug life!

Advertisement
Advertisement
ADVERTISEMENT ×
previous
My FURst Time: What is the Best Dog for New Owners Like You?
next
2021 Dog Gift Ideas: Touching Ways to Honor Your Dog