Thanksgiving Day parades are a great American tradition that bring communities together to enjoy colorful floats, passionate performers and giant inflatables. These awesome events are hugely popular, which is great for the atmosphere, but not so great for dogs. Pups are technically allowed outside during all of the parades on our list, but it’s not recommended that you bring Fido. The loud noises, huge crowds and frightening floating objects can startle even the bravest of hounds. To ensure you and your pooch don’t miss out on the festivities, we’ve searched for pet-friendly hotels with parade views where you both can relax and enjoy the show without having to worry about the crowds. 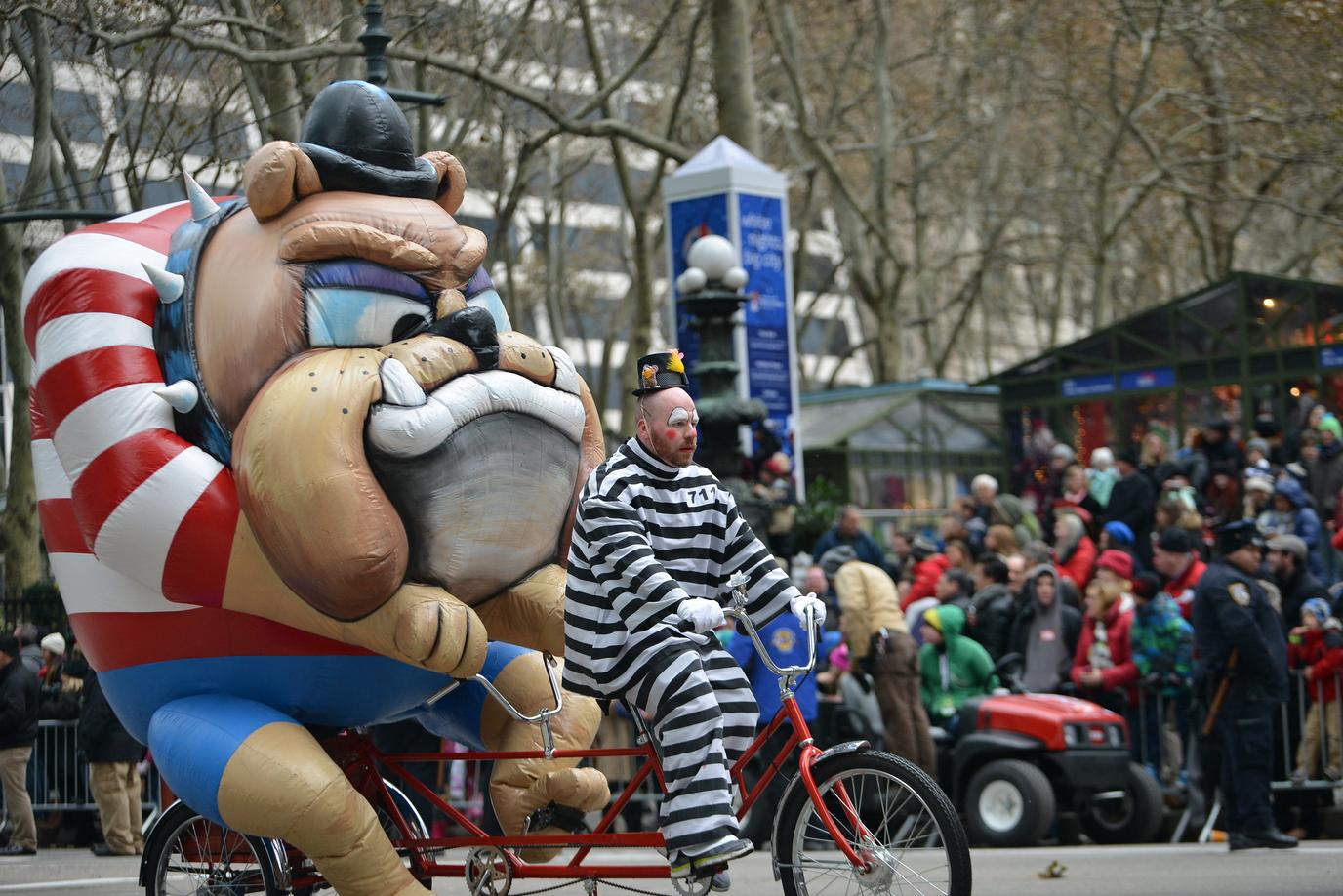 Coming to a dog park near you … – Photo by Flickr/SPakhrin

The granddaddy of parades, The Macy’s Thanksgiving Day Parade has been entertaining people around the country since 1924. More than 3.5 million people line the streets of the Big Apple every year, hoping to catch a glimpse of the famous balloonicles (balloon-based vehicles) and floats making their way along the 2.5-mile route from Central Park West to the flagship Macy’s store in Herald Square, Manhattan. Canines have played an integral part in the parade since 1950, from the highly trained, vapor-sniffing dogs who keep the crowds safe to Frieda the Dachshund, Snoopy and Scooby Doo, all flying high in the sky above. The event starts at 9 a.m. on Thanksgiving Day.

Small dogs can watch the show from a pet-friendly room at the Hampton Inn Manhattan 35th Street. One of the parade’s official hotels, it offers a number of rooms overlooking the final stretch of the spectacle, just around the corner from Macy’s Herald Square. For another option that’s slap-bang in the middle of the parade route, check out the New York Hilton Midtown. Two pets up to 75 lbs can stay at this centrally located, 4-star hotel a few blocks from Central Park. 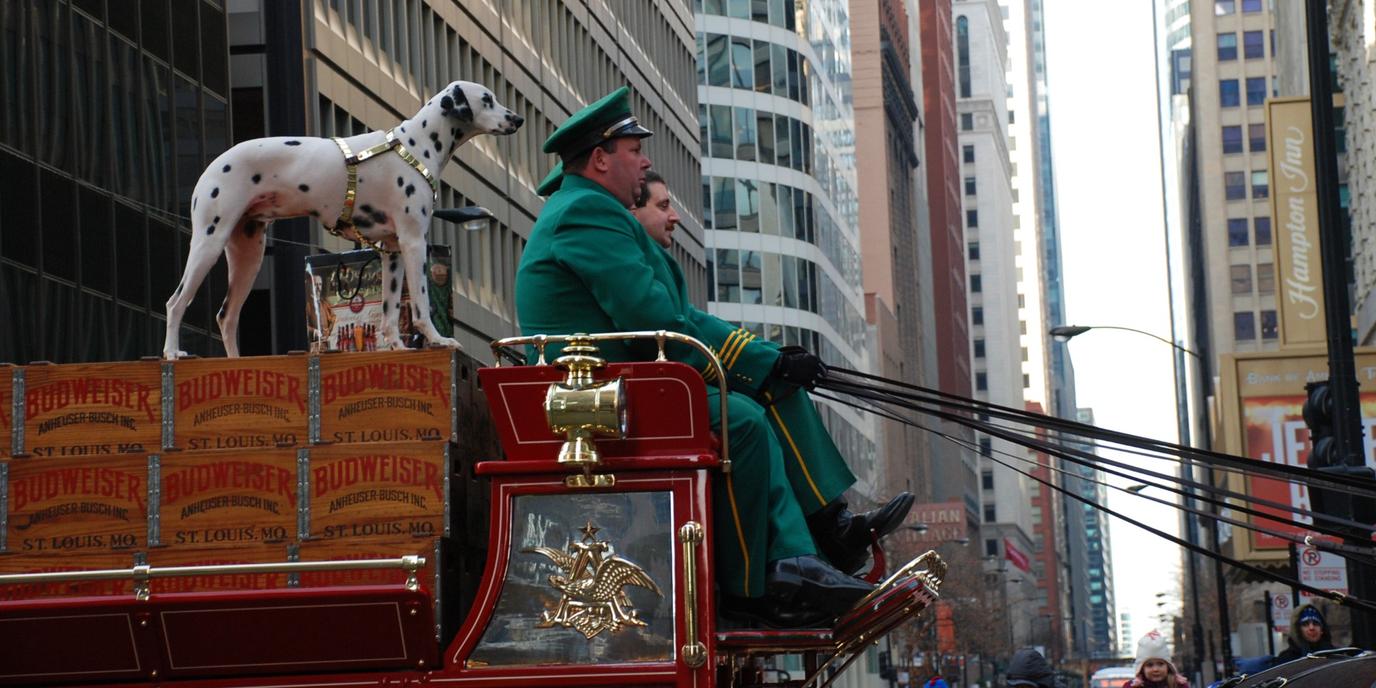 “Where grateful hearts gather” is the slogan for the Chicago Thanksgiving Parade, and it won’t take you long to realize why. You and your pooch will be truly thankful when you see the effort that goes into this tremendous display. State Street and the skies above are flooded by balloons, floats and world-class entertainers capturing the hearts of more than 350,000 people in attendance every year. Next time you complain about having to pick up Fido’s poop, spare a thought for the 70 members of the parade poo crew. They work tirelessly to scoop up the performing horses’ droppings along the route. Not all heroes wear capes, some carry plastic bags! The event starts promptly at 8 a.m. on Thanksgiving Day.

The Palmer House Hilton is one of the most popular pet-friendly hotels to stay at during the parade. Located within walking distance of Grant Park Dog Park, this funky hotel allows two pets up to 75 lbs and provides window seats to the greatest show in Chi-town. 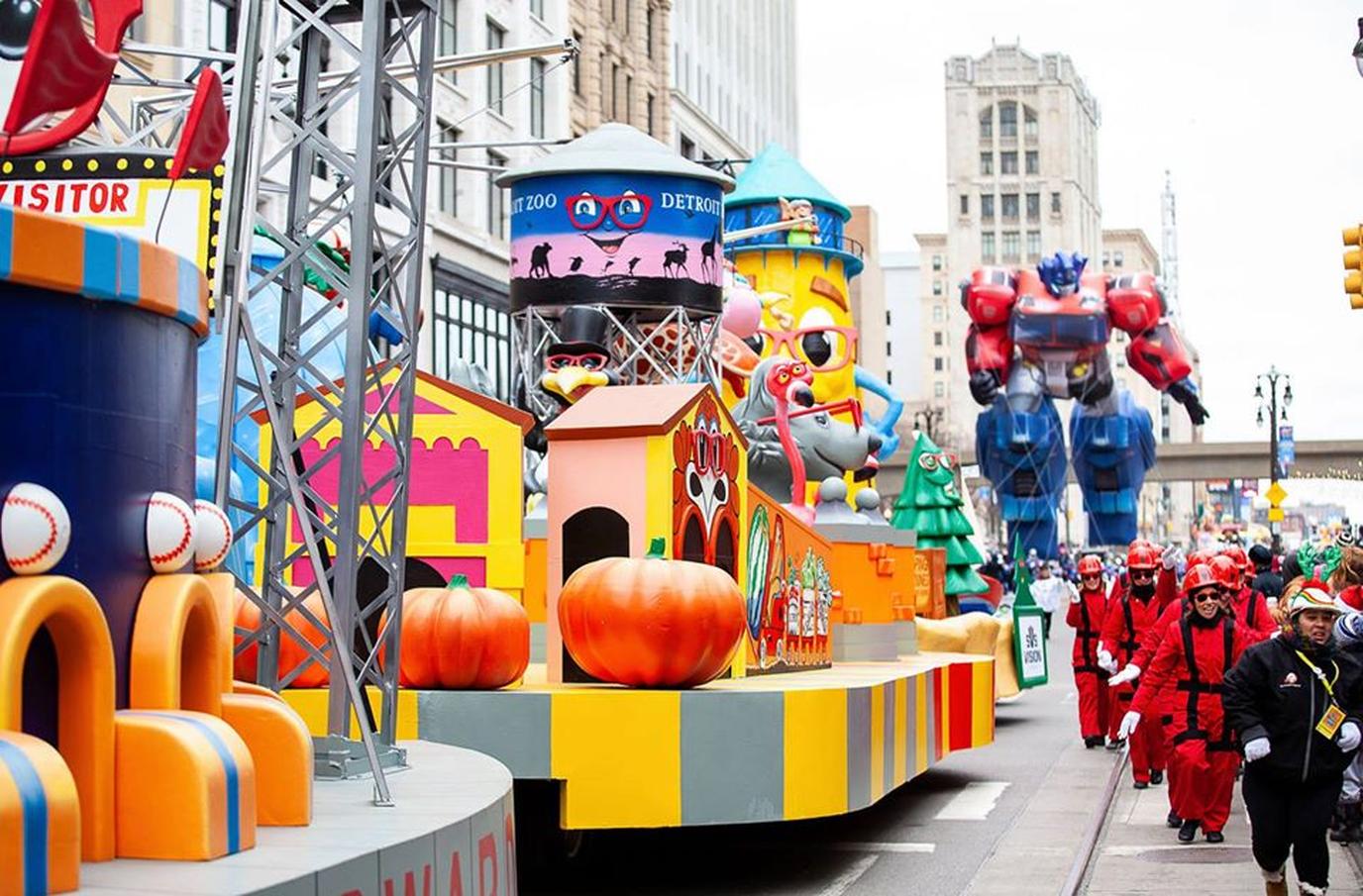 Detroit’s streets go through a Transformer-ation for the parade. – Photo by Facebook.com/TheParadeCo

America’s Thanksgiving Parade is broadcast to more than 185 cities, allowing canines who aren’t lucky enough to be part of the million-strong crowd to enjoy the festivities from the comfort of their own homes. Nothing beats the sights and smells on the day of the march down Woodward Avenue. Every year since 1924, the street has transformed into a runway for diverse dance teams and magnificent marching bands to entertain the gleeful crowd. The parade begins at 8:50 a.m. on Thanksgiving Day.

One side of the pet-friendly Aloft Detroit at The David Whitney faces out onto the parade route. This boutique hotel is housed within a dramatic skyscraper built in 1915. Canine guests are welcomed with a treat at reception. When you’re not munching on popcorn and marveling at the floats, take your pooch for a game of fetch at nearby Grand Circus Dog Park. 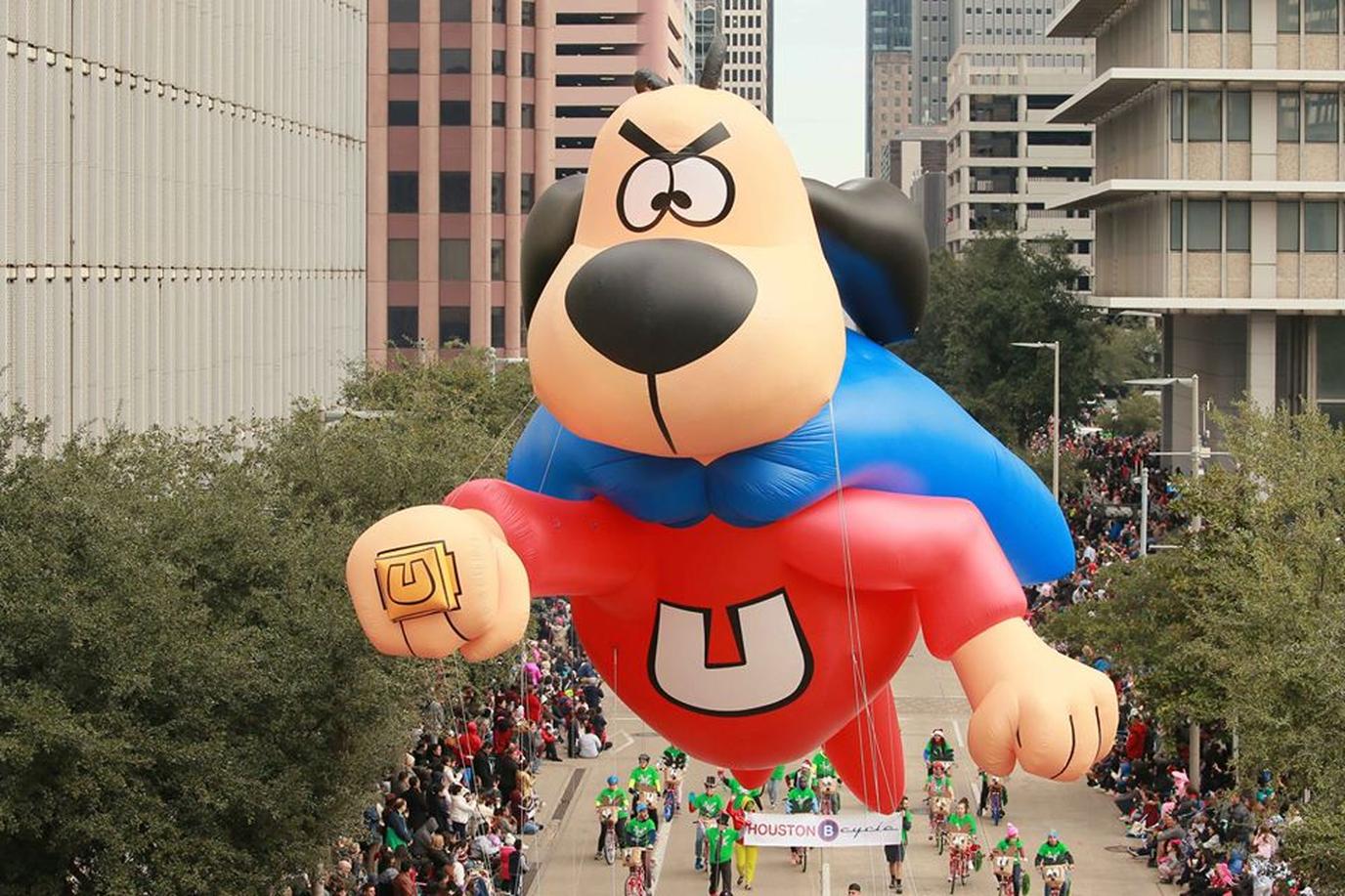 The annual H-E-B Thanksgiving Day Parade in Houston greets the arrival of the holiday season in style, with balloons and floats that celebrate the communities of Texas. A joining together of new and old, the proceedings include recognizable crowd favorites along with original designs each year. The 20-block route gives revelers plenty of room to find free public seating. The parade starts at 9 a.m. on Thanksgiving Day.

Sit back, relax and enjoy the show from your pet-friendly, parade-side room at the Hyatt Regency Houston. Dogs will be gifted a pet collar upon arrival and can dash to the grassy relief area on the sixth floor while waiting for their favorite floats. 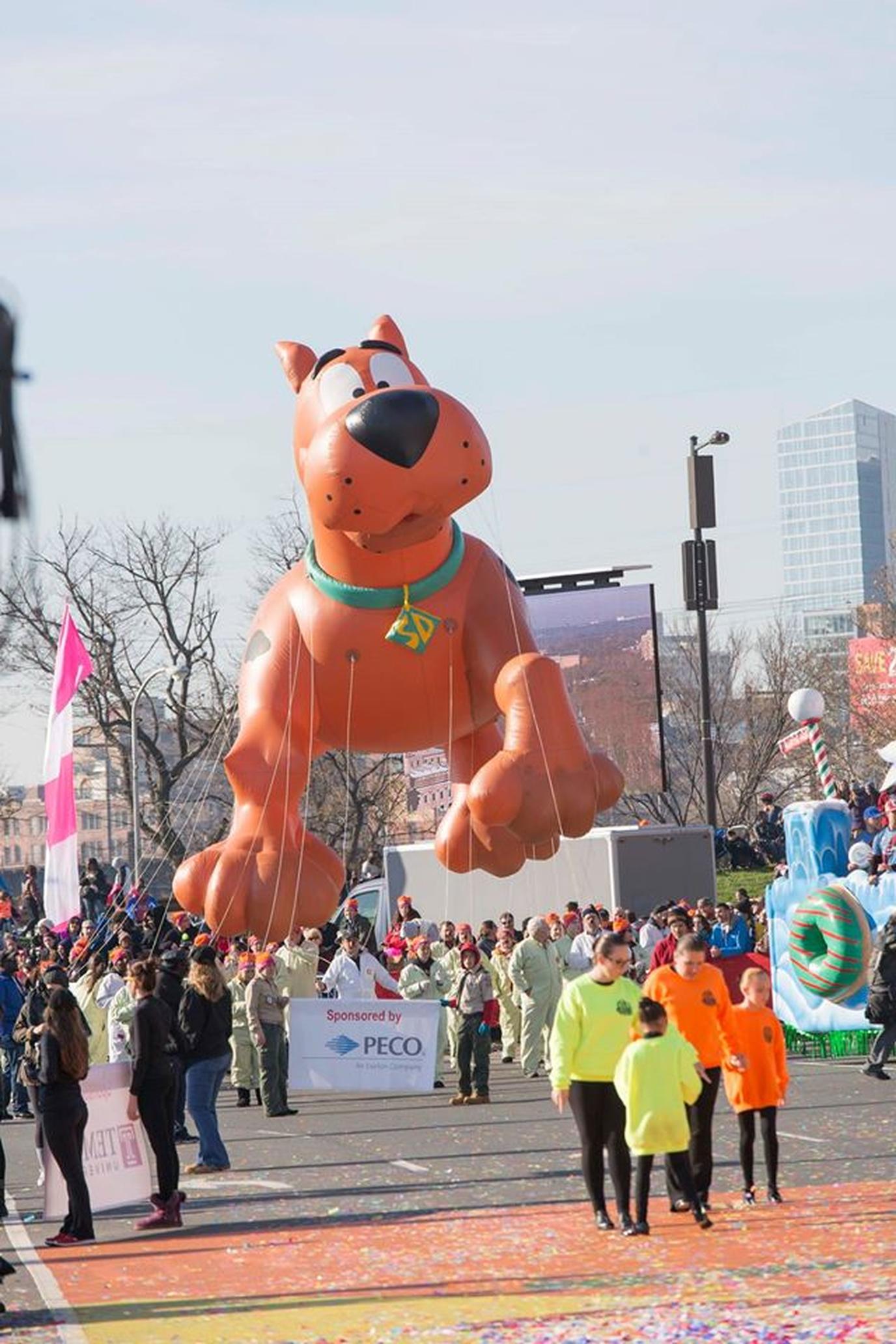 “If he’s here, the Scooby Snacks can’t be far away!” – Photo by Facebook.com/6abcThanksgivingDayParade

The 6abc Dunkin’ Thanksgiving Day Parade proudly boasts the title of the oldest parade of its type in America. Although the spectacle has become more elaborate over the years since its inception in 1920, the values have remained the same: fun, family and appreciation. Bring Fido to the original Thanksgiving Day Parade, the inspiration for those that followed in New York, Chicago and other cities on this list. The parade kicks off at 8:30 a.m. on Thanksgiving Day.

The park-view rooms at The Logan Philadelphia Hotel offer a glimpse of the parade as it moves past the park. The $50 pet fee is donated to a local animal charity. Dogs can use the complimentary beds and bowls, and are welcomed with a snack at the front desk. 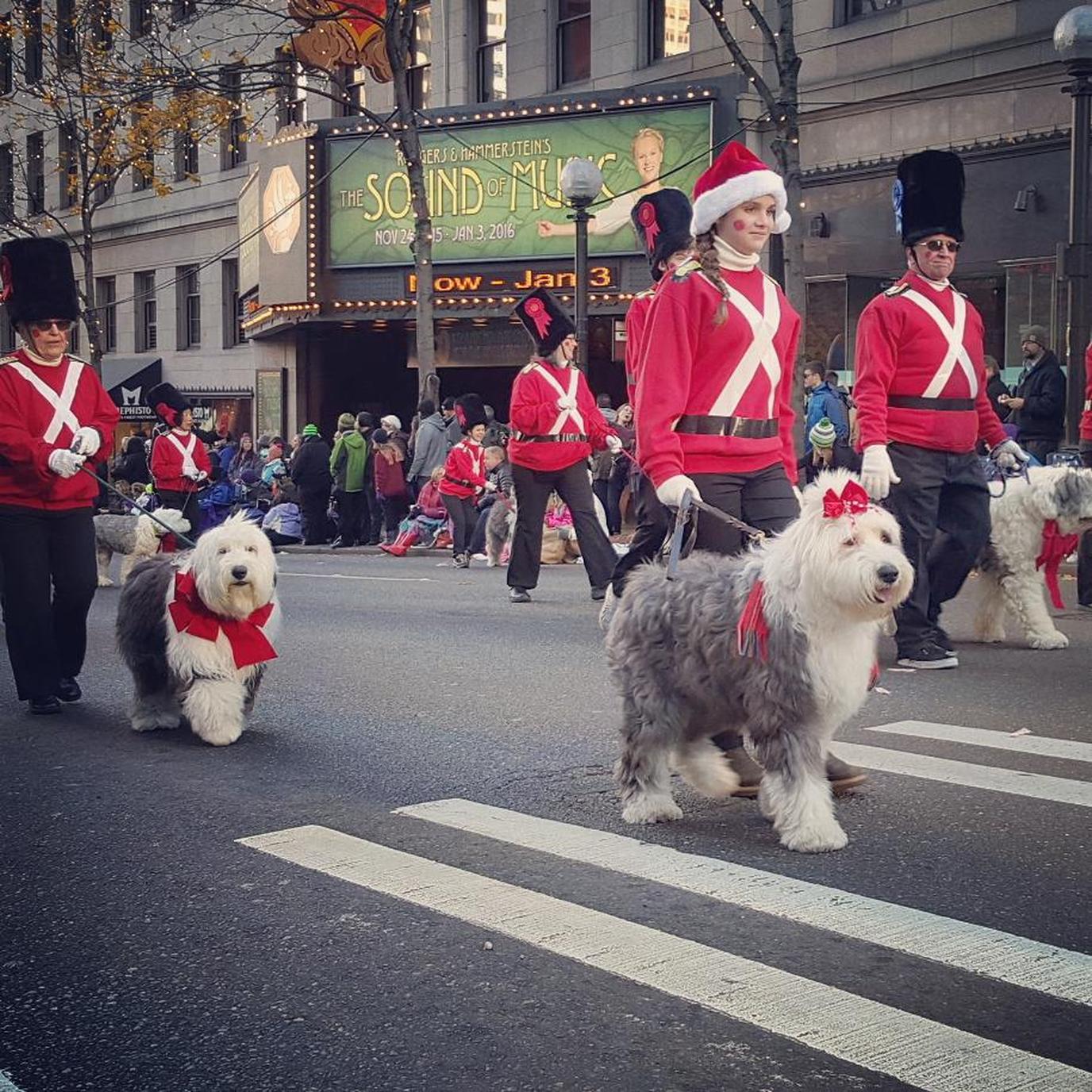 “I bet y’all wish you had a coat like ours!” – Photo by @qtjeepinmom

Macy’s didn’t want to prohibit people on the west coast from enjoying a Thanksgiving Day extravaganza for themselves. In fact, die-hard parade enthusiasts can catch the show in New York and rush to the other side of the country to watch the Macy’s Thanksgiving Day Parade in Seattle, which takes place the day after Thanksgiving. Ever wondered what it would be like to be trapped inside a snow globe? Or, what Santa’s sleigh really looks like? If so, this is the parade for you. The festivities begin at 9 a.m. on Friday, November 29.

Dogs and their owners can witness the second-largest Macy’s parade in America from the comfort of select rooms at Hotel Theodore in downtown Seattle. After the show, take a post-Thanksgiving Day stroll in nearby Plymouth Pillars Dog Park to work off a little turkey weight.

This post from BringFido originally appeared as Pet-Friendly Rooms With a View of Your Favorite Thanksgiving Day Parades.