Upon completion in 1938, Route 66 spanned 2,400 miles, passed through eight states and three time zones, and connected urban and rural destinations from Chicago to LA. Unfortunately, the days for the “Mother Road” were numbered. After the introduction of new highways across the country, the legendary road was finally decommissioned. Nowadays, the remaining sections of Route 66 and the iconic attractions along the way are the ideal setting for your pooch’s very own classic American road trip. 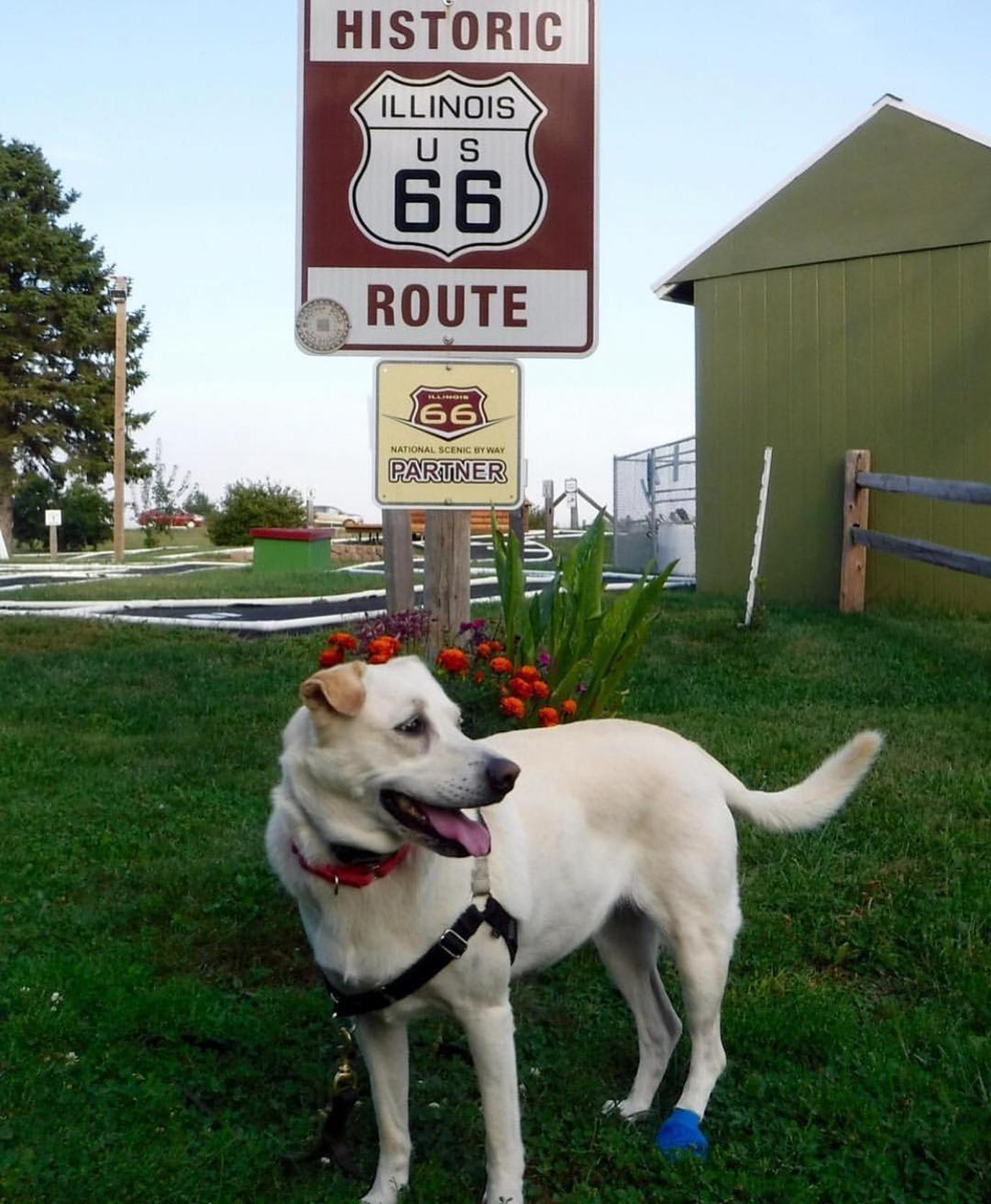 Route 66 begins at Grant Park in Chicago, where you and Fido can explore the dog park before putting the keys in the ignition. The Chicago section of the road is lined with murals and untouched historic gas stations. In nearby Collinsville, the World’s Largest Catsup Bottle is the first of many oddities you’ll see along the way. For a break from the road and some gorgeous hiking opportunities, stop at the Midewin National Tallgrass Prairie, a former ammunition factory during World War Two and the Vietnam Conflict. Bullets are no longer made here; instead, the whole area has been converted into a 7000-acre tall grass preservation with 20 miles of pet-friendly trails.

Back in its heyday, drive-in movie theaters were packed every night along the Mother Road. Litchfield Sky View Drive-In is featured in the Route 66 Hall of Fame and is the last remaining drive-in on the highway in Illinois. After the credits start to roll, you can hang your hat for the night at one of Litchfield’s pet-friendly hotels. 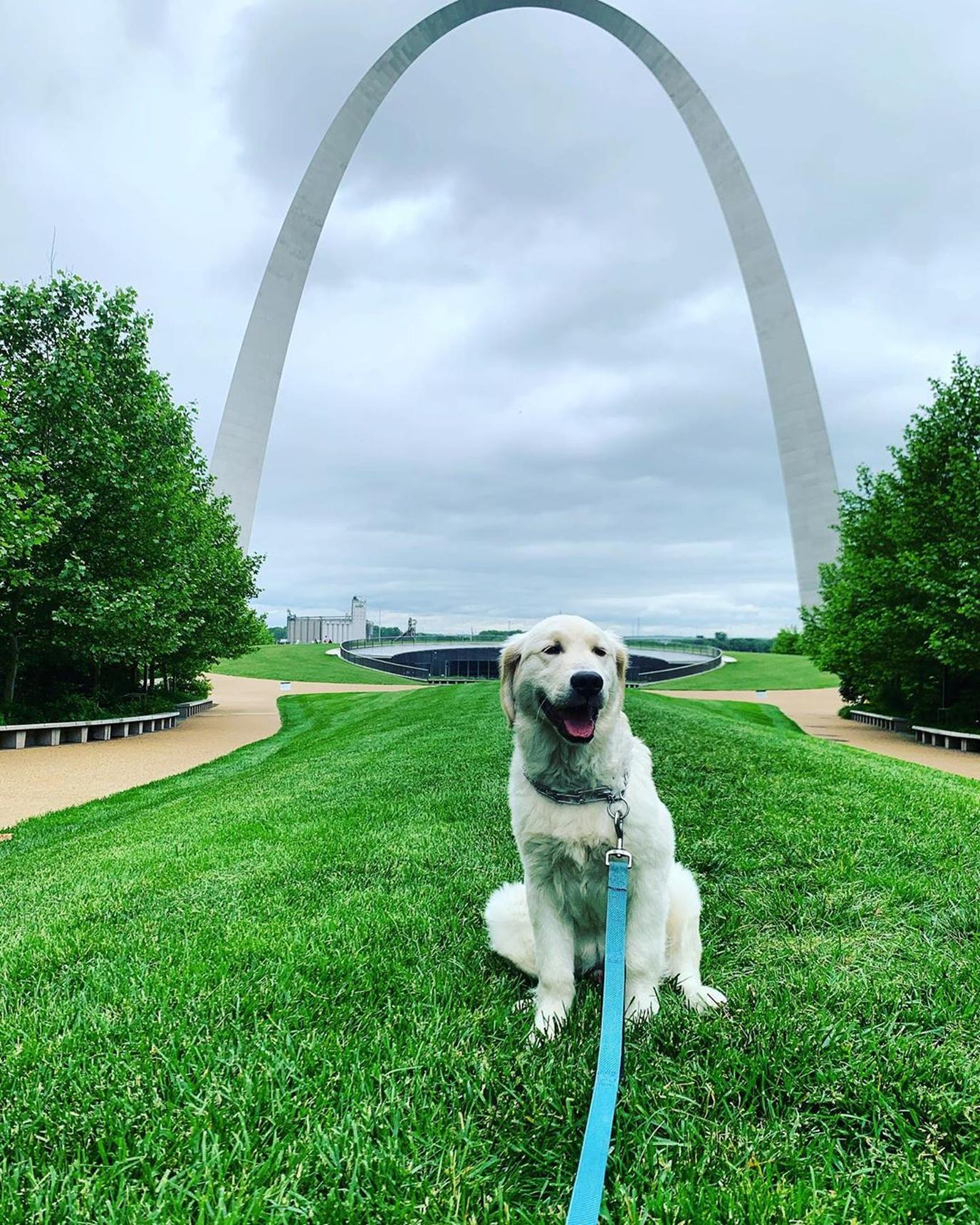 “This thing is my arch-nemesis.” – Photo by @thegoldenretrieverotis

Home to one million people along the Route 66 corridor, Missouri is the next state en route. Although not the capital, St. Louis is a major city in the Show-Me State. Take “paws” and pay Fido’s respects to 19th-century westward pioneers at Gateway Arch National Park on the banks of the Mississippi River. The world-famous arch, which celebrates the city’s role as the “Gateway to the West,” towers 630 feet into the sky and is a sight to behold. St. Louis Riverfront Trail is a pet-friendly paved pathway that covers just over 21 miles and provides great views of the monument.

After a day in Saint Louis, drive to nearby Cuba, MO, and spend the night at one of the state’s most popular attractions, The Wagon Wheel Motel. The 75-year-old structure has earned its place on the National Registry of Historic Places and offers a couple of pet-friendly rooms.

Before leaving Missouri, swing by Devil’s Elbow. The centerpiece is an old steel truss bridge that crosses the Big Piney River. Remnants of the popular pathway can be found throughout this area, including eerie old buildings that once thrived with tourists. 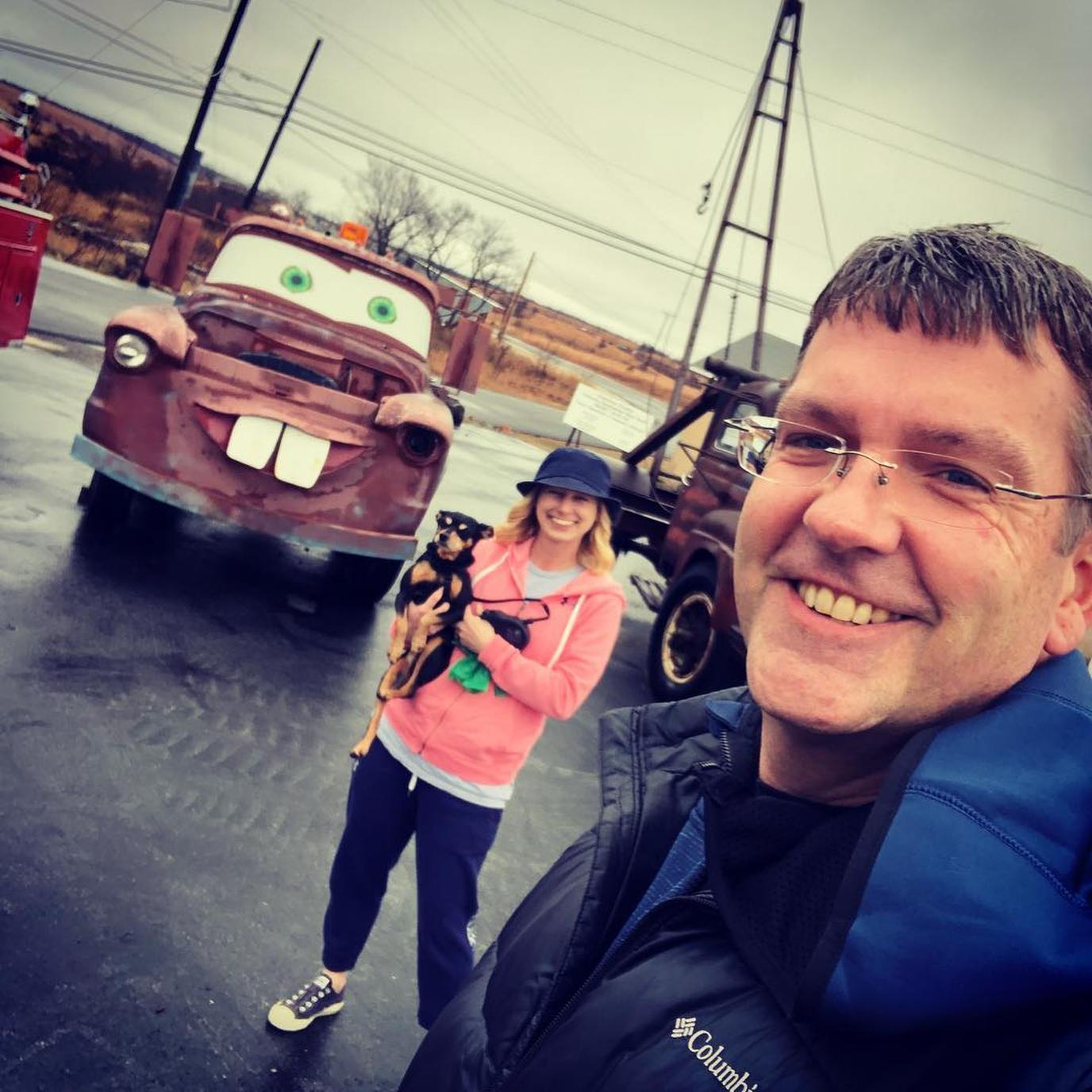 “I meet celebrities all the time.” – Photo by @raggyjo

Kansas has the shortest stretch of Route 66 of any state. The 13 miles that wind through the county of Galena are well preserved and still have a few whacky attractions that provide a great backdrop for photoshoots. Cars on the Route doesn’t allow canines inside to dine, but the outdoor area houses several “living” vehicles, including the mining boom truck that inspired the character “Tow Mater” in the Pixar movie “Cars.” Luckily, Old Riverton Store & Deli is just six minutes up the road. The classic grocer has been feeding locals and travelers since 1925. To this day, you can grab a delicious deli bite with your dog outside the building, which is listed on the National Register of Historic Places.

Spend the night at the Old Riverton Post B&B. Located just two blocks from the highway, this historic house was built in the late 1800s. 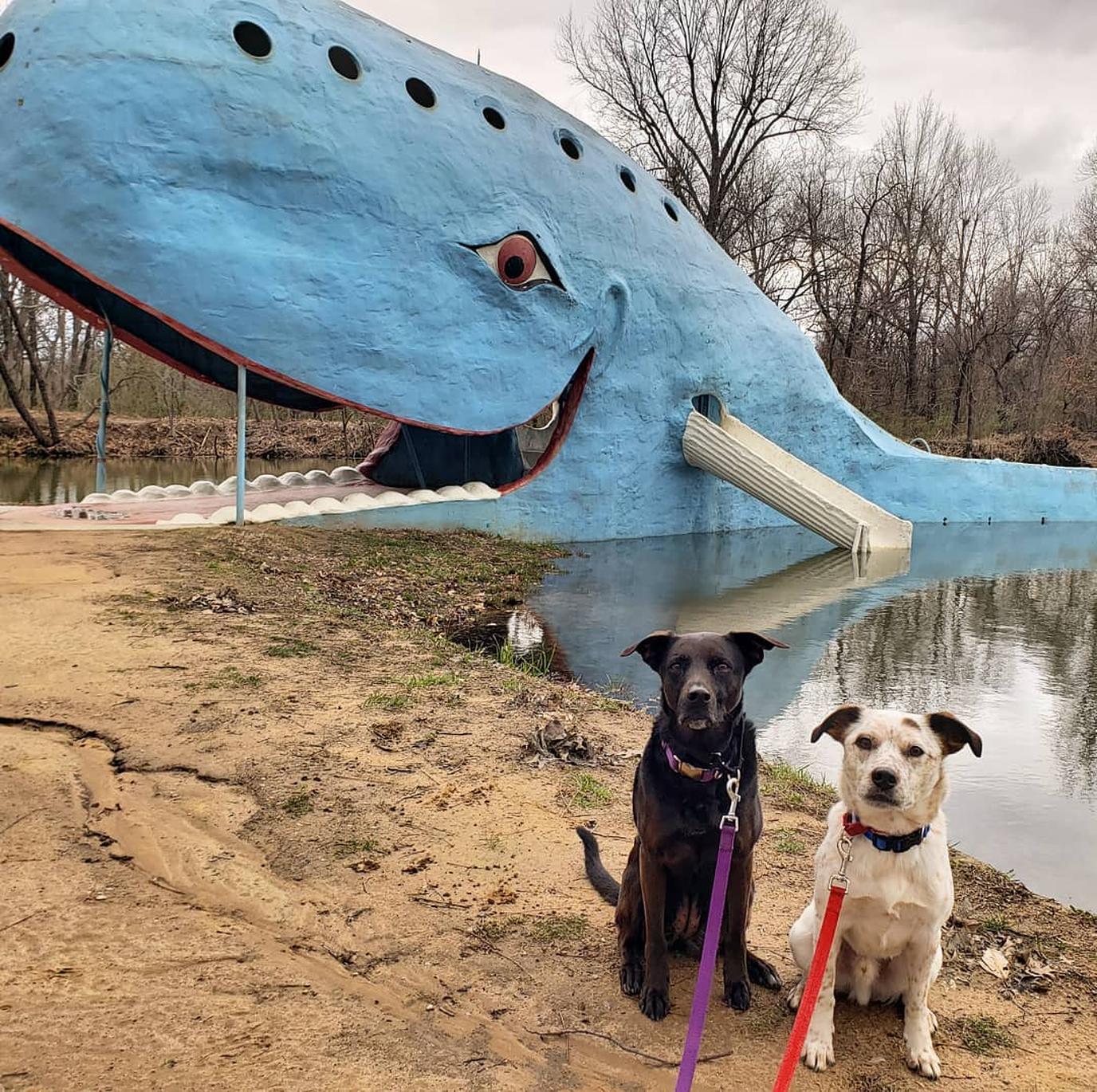 “When you’ve seen one giant fake Blue Whale, you’ve seen them all!” – Photo by @sam_scicc

Cyrus Avery, the Godfather of Route 66, lived in Oklahoma and it’s where he first hatched his plan to construct it. The Oklahoman corridor is lined with gaudy roadside attractions and old-style vendors. Begin your tour at Commerce, OH, and the Hole in the Wall Conoco Station. This quirky filling station was built into a wall in the 1920s. Keep driving and you’ll end up at Ed Galloway’s Totem Pole Park, full of bright totem poles constructed by yet another quirky artist. You can explore the pet-friendly trail around the huge handmade sculptures with your pup for free. Half an hour away, you’ll arrive at one of the strangest anniversary gifts of all time, The Blue Whale of Catoosa. Hugh Davis built it in the early 1970s as a surprise for his whale-obsessed wife Zelta.

Sleep three minutes from your new friend the whale at this beautiful gingerbread house. Be careful not to shoot your pooch a grumpy glare when he steals your last bite of dinner here; you can still face jail time in Oklahoma for pulling a face at a canine! 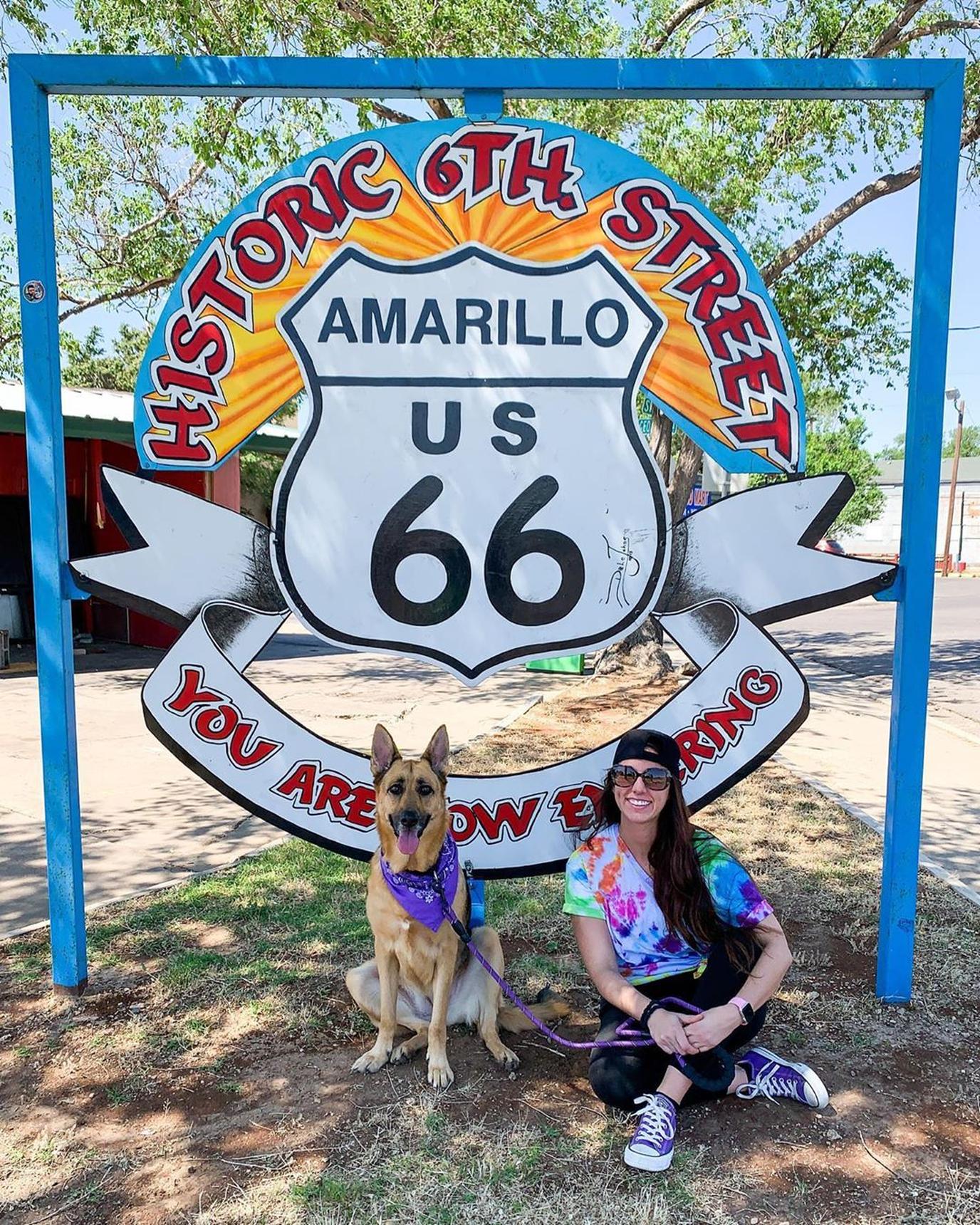 The Texas stretch of Route 66 goes through the panhandle for 179 miles, taking in 17 towns along the way. Fido’s first stop should be at the Leaning Water Tower in Groom. Not as widely known as the tower in Pisa, passersby often wondered how it got its lean. Was it lightning, an earthquake or a UFO crash? No, it was actually a marketing ploy by the owner to draw attention to his nearby truck stop. Half an hour from the tower, you’ll reach one the biggest towns en-route in Amarillo. Stop to check out your second oddity of the state, Cadillac Ranch. Forget about all the other fields you’ve seen with Cadillacs buried nose down in the mud, this totally Instagram-worthy roadside attraction is the original and was first installed in 1974.

After your pooch has left his mark at Cadillac Ranch, refuel at The Big Texan Steak Ranch and Brewery. Grab a seat in the pet-friendly beer garden and see if anybody can take on the 72oz steak challenge (humans only, Fido). Customers who eat the monster slab of meat in under an hour don’t have to pay a dime. Sleep off the meal at Texas Space, a bright blue house with an awesome balcony and a “mascot” by the name of Peabody. Fido will love getting to know the plastic moss-covered dog hiking his leg in the grass. 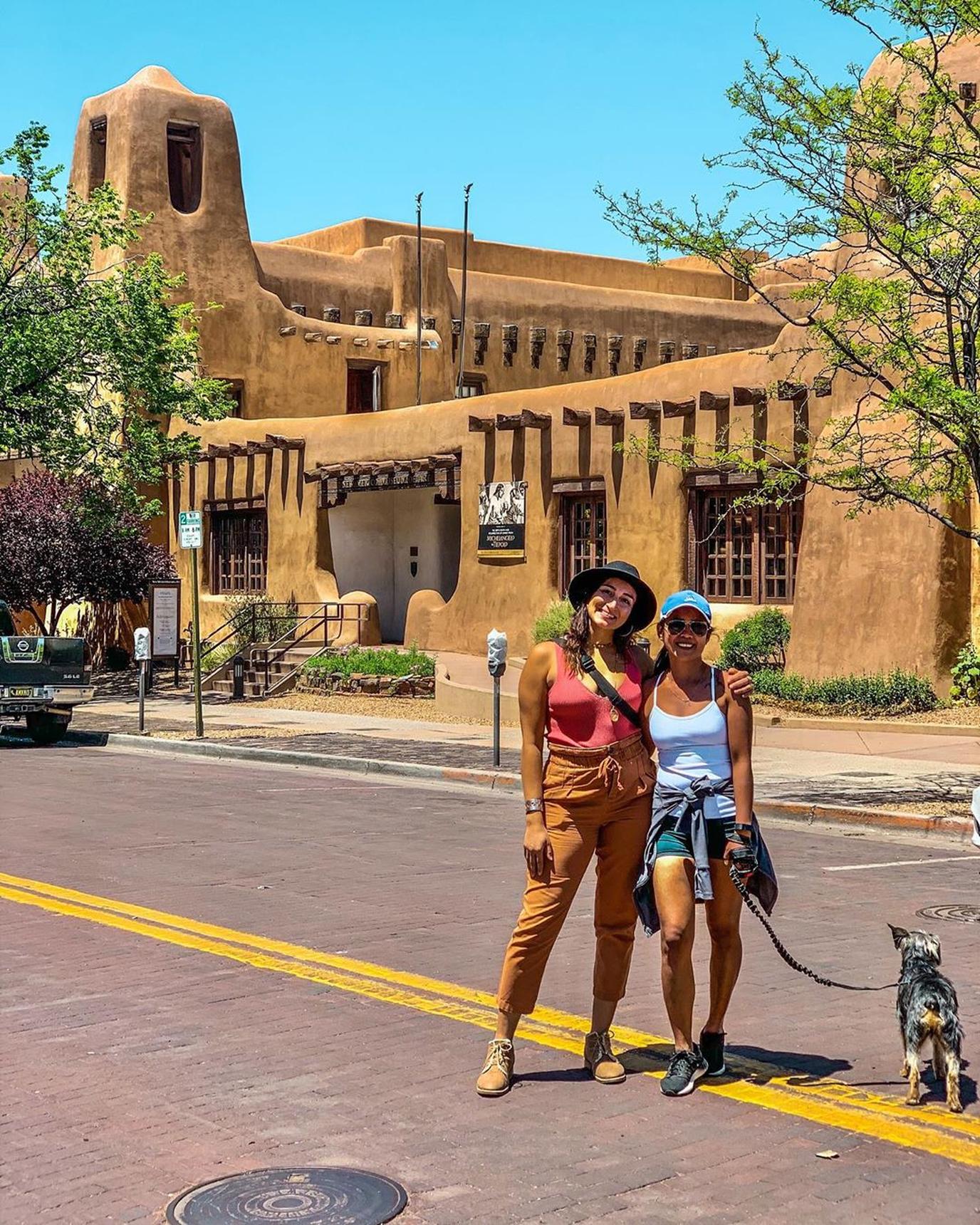 “Route 66 is for rebels like me.” – Photo by @overthemoonabovethemountain

Just as you’re starting to get used to the weird and wonderful sights of Texas, you’ll find yourself in New Mexico. Follow the brown road signs along the original 1926 section of the highway to downtown Santa Fe, which is easily worth exploring over a weekend. Next up is Albuquerque, the largest city in New Mexico, and a historic stay at a classic accommodation. El Rancho Hotel was popular during the glory days of Route 66 and was even favored by Hollywood superstars like John “Wagging” Wayne and Kirk “Dog-less” Douglas.

After a long drive, Fido can stretch his legs at El Morro National Monument. Dogs are welcome on the short trek to the monument and beyond to a view of Native American ruins and protected inscriptions that date back centuries. 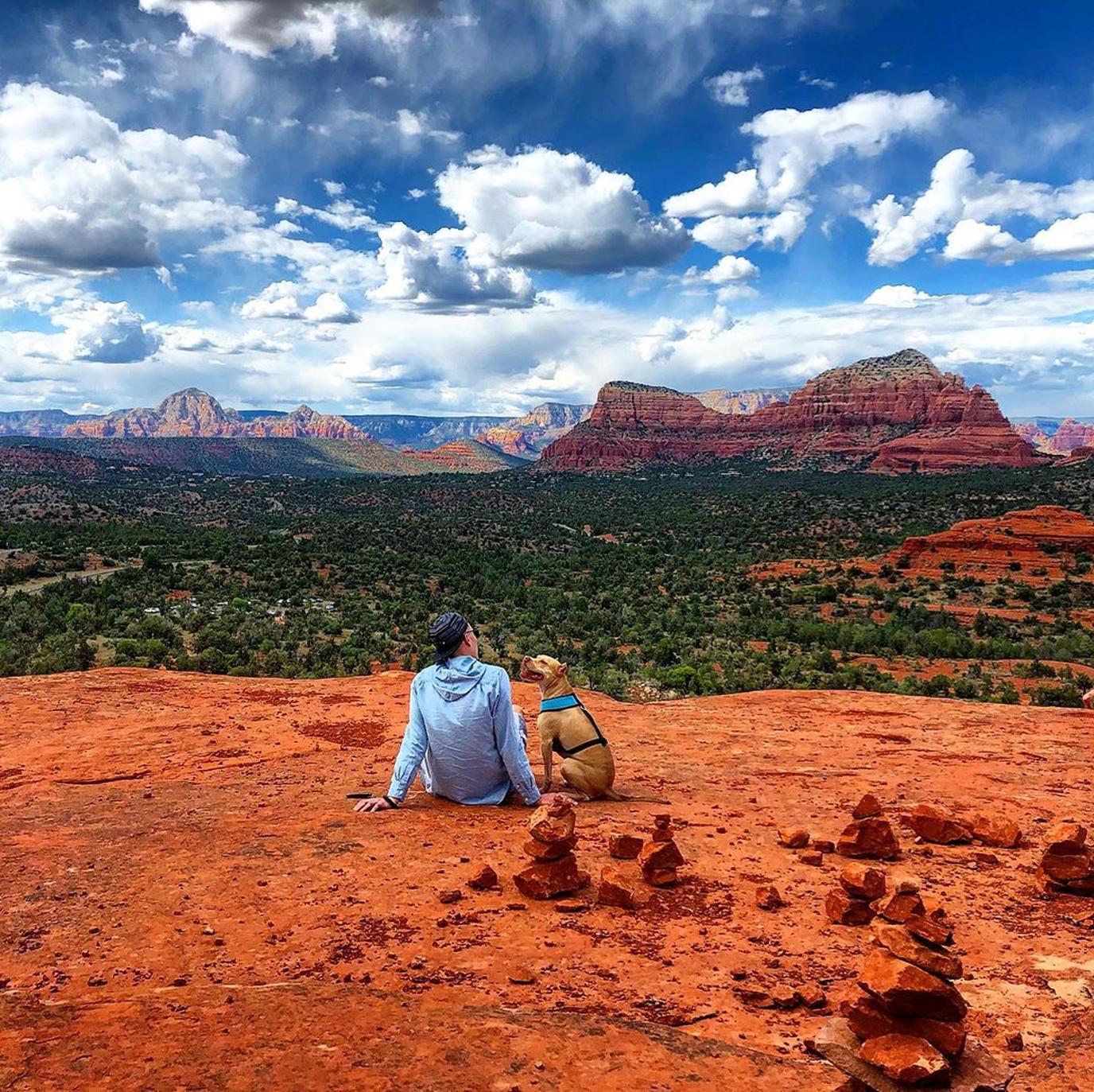 “What do you mean, ‘red rocks.’” – Photo by @official_hamlett

The I-40 was placed directly over Route 66 in parts of Arizona. If Fido can sniff it out, he’ll be rewarded with some of the longest sections of the old road sandwiched between the beautiful red rocky mountains and the Colorado River. Stop for a hike in Petrified Forest National Park, which leads to magnificent views of the surrounding area.

After your trek, refuel at La Posada Hotel. This eclectic inn is architect Mary Elizabeth Jane Colter’s southwestern masterpiece. Explore the gardens, gallery and museum with your leashed pup, just avoid the hotel cat. From here, head to Walnut Canyon National Monument, one of the few canyons in the country that allows pets. You and your pooch can descend down 185 feet of steps and check out 25 rooms that were built into the walls 700 years ago.

Follow up your hike with a gentle stroll on the Route 66 Trail in nearby Flagstaff and a stay at The Shop, a cabin with a hot tub and hammock. 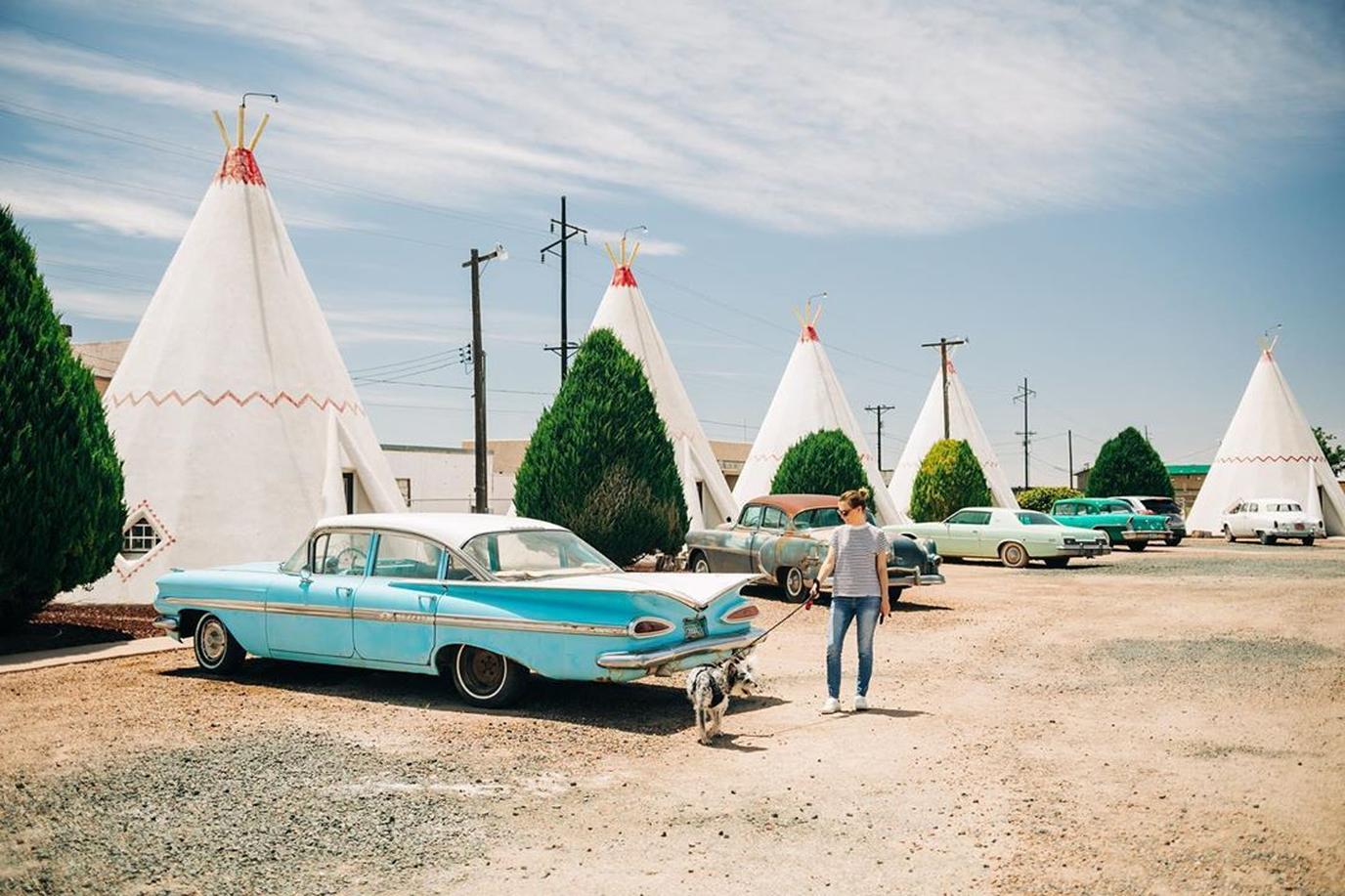 “Waggin’ at the Wigwam!” – Photo by @anokiart

Your epic road trip ends in California, but there’s so much to see in the Golden State before you head home. Swing by Amboy Crater, an extinct volcano only 1.5 miles south of Route 66. Estimated to be 79,000 years old, the volcano last erupted 10,000 years ago. The drive to get there will take you through stunning scenery, and it’s a great place to visit at sunset. Neighboring Mojave National Preserve has sections that welcome dogs to roam off-leash as long as they are under voice control. For a taste of the Old West, bring your pooch to Calico Ghost Town. This old mining town is the ideal destination for furry ghost hunters to experience the “paw-ranormal.”

Hit the road again to San Bernardino and The Wigwam Motel, one of the last remaining lodgings of its type in the world. Stay together in one of the big concrete wigwam rooms before making your final journey on Route 66, which leads you right to the Pacific Ocean. Stroll along the pet-friendly boardwalk to Santa Monica Pier, where you’ll find a sign for the “End of the Trail.”

What a great adventure, a once-in-a-lifetime experience, another box ticked off Fido’s bucket list. Now all you have to do is drive home!

This post from BringFido originally appeared as Route 66: A Pet-Friendly Road Trip.