Fido’s ugly Christmas sweater isn’t just adorable, it’s also perfect for disguising his winter weight. Who isn’t guilty of letting themselves go over the holidays? One thing that’ll make him feel better about it is a pet-friendly Christmas race this December. Help raise money for a good cause, spread joy with matching costumes, and give yourself and your pup an excuse for a second scoop of dessert. 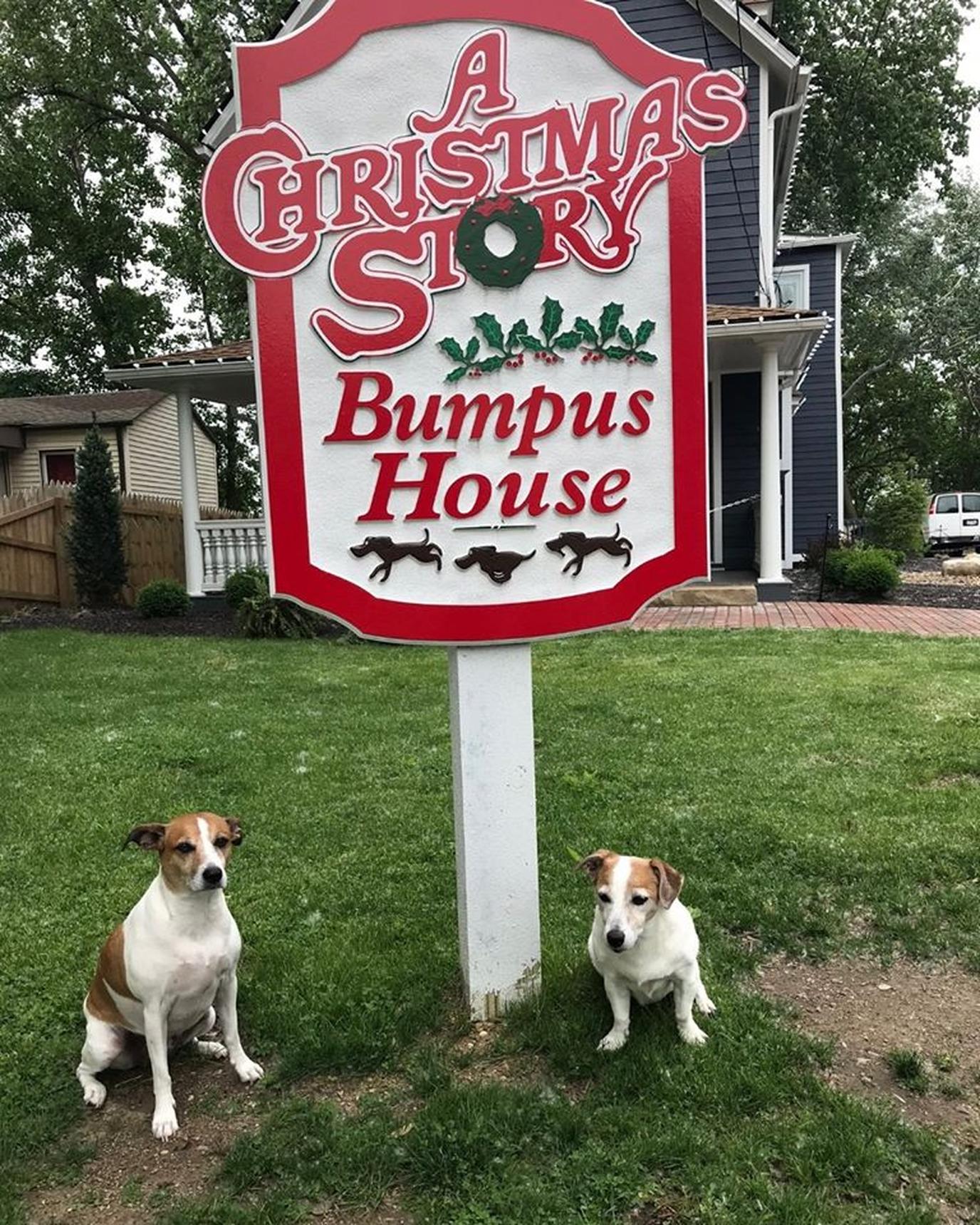 “The Bumpus Hounds are sniffing out the turkey!” – Photo by Facebook.com/AChristmasStoryHouse

A Christmas Story House in Cleveland, OH is where much of the beloved 1983 movie, “A Christmas Story,” was shot. Now restored to its movie splendor, the building has been open year-round to the public (but sadly, not to Fido). To get into the holiday spirit, the tourist attraction hosts A Christmas Story Run every December. Bring your “Bumpus Hound” to take part in the Runners with Canine category. Each dog taking part receives a race bib, scarf, dog tag, scoop and bag, and a unique Christmas Story shirt. There are water and relief stations along the way and treats at the finish line. The number of participants is limited to 400, so make sure you sign up nice and early to guarantee a spot.

A Christmas Story Run will be held on December 7. Reserve a pet-friendly room at Drury Plaza Hotel Cleveland Downtown and explore the sights and smells of Cleveland. 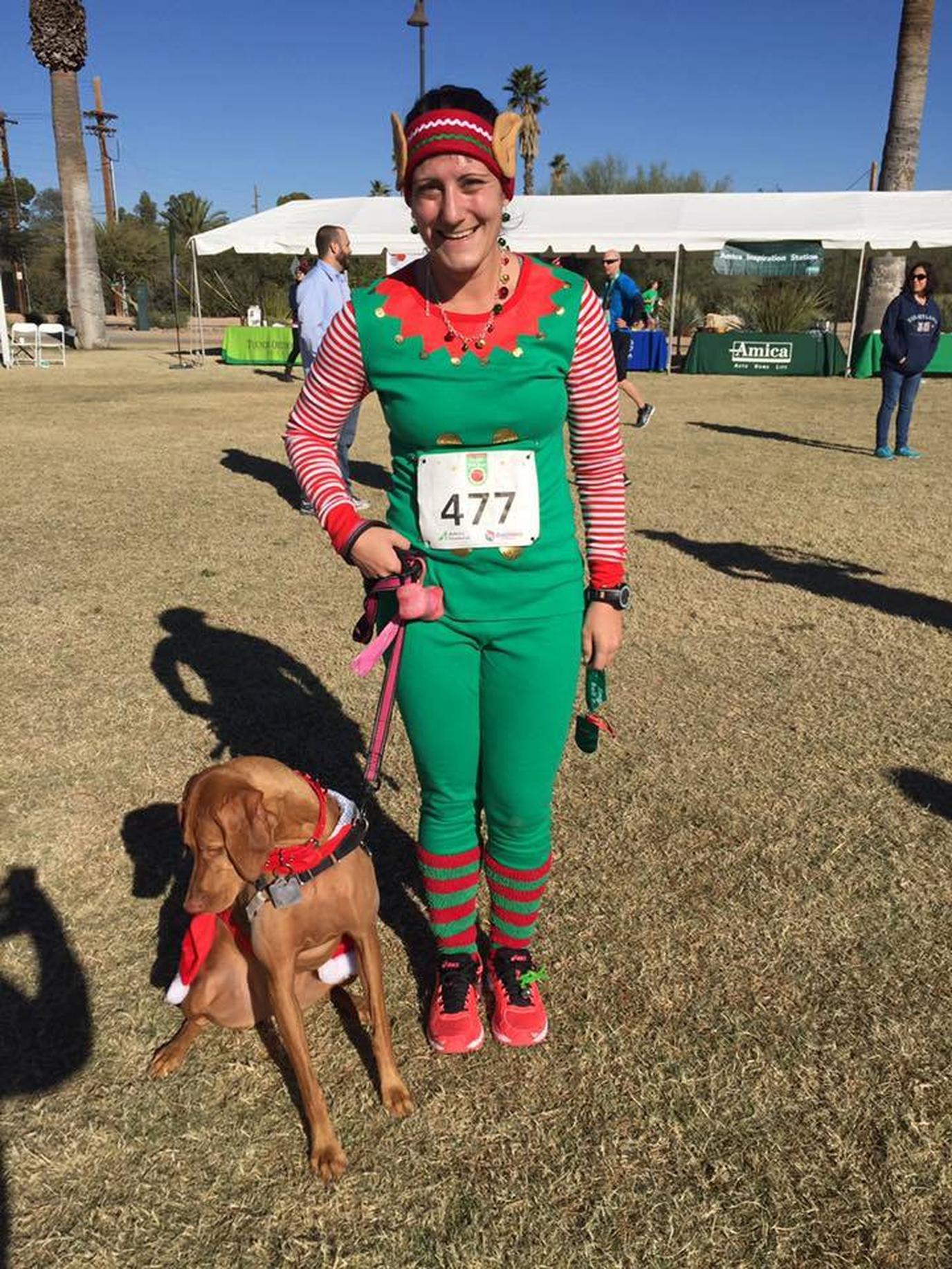 “I can’t even … I just can’t!” – Photo by Facebook.com/JingleBellRunWalk

The Arthritis Foundation hosts Jingle Bell Run events across the country, allowing mutts to strut their stuff in festive costumes for charity. You can run as a tandem or bring a team to race and raise money for the fight against arthritis. Enter the pet costume contest at Jingle Bell Runs in Lyndhurst and Pittsburgh; receive a doggie bandana at the race in Bellingham; and check out the dog zone in Austin. The entire registration fee is donated to the Arthritis Foundation.

Check out your nearest race for times and dates. 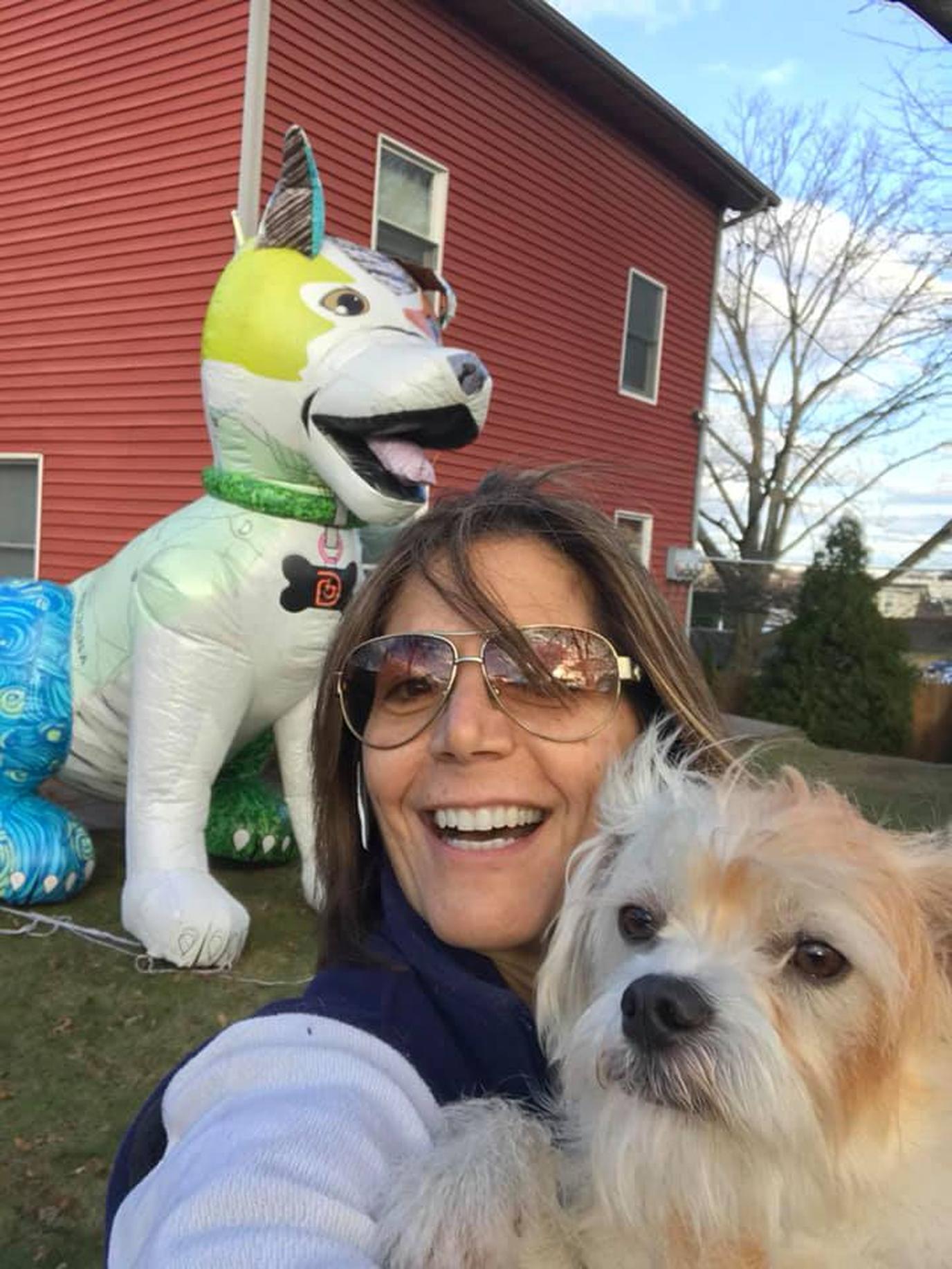 It’s a blow-up dog-eat-dog world out there! – Photo by Facebook.com/hotcocoarunnewro

For more than a decade, the people of New Rochelle have turned out en masse to walk, run and prance to raise awareness for ALS, Alzheimer’s and diabetes. All of the races at the 11th Annual Hot Cocoa Run & Dog Walk are pet friendly, but the 1-mile dog walk is the only one that requires racers to have a pooch pace setter. The fastest male and female canines are awarded prizes.

The 11th Annual Hot Cocoa Run & Dog Walk will be held on December 7. Put your feet up after the race at the Residence Inn by Marriott New Rochelle. The grassy areas outside are perfect for a cool down. 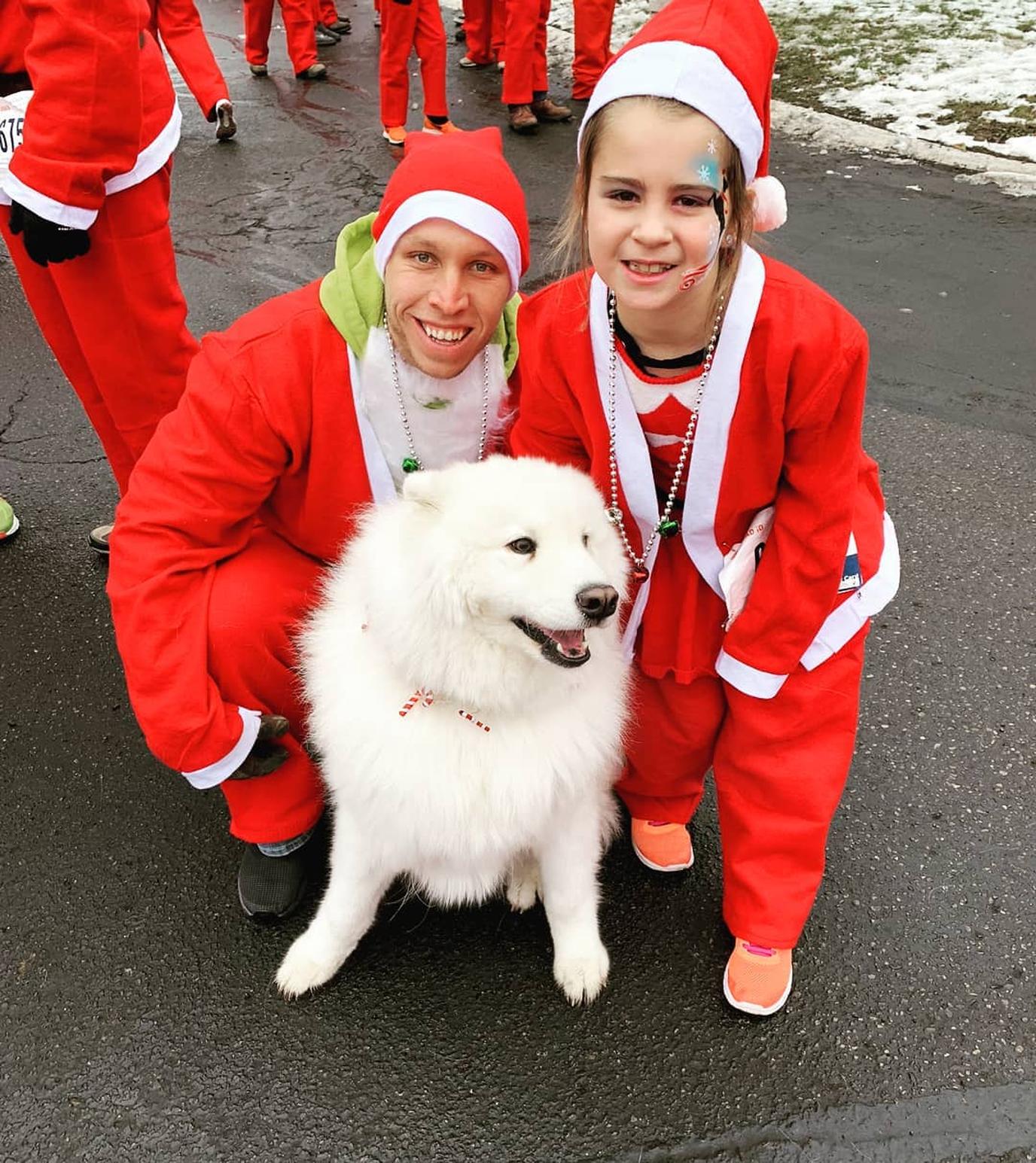 The YMCA Santa Run pays homage to Saint Nick by ensuring every human dresses up in a five-piece Santa suit on the day. This charity event is too laid back to bother with awards or finish times; it’s purely recreational. The 5K Fun Run or 1-Mile Walk around Downtown Flint are both pet friendly, and the sea of red suits is truly a sight to behold.

The YMCA Santa Run will be held on December 7. After the race, you’ll want to get as far away from the jolly masses as possible. Spend the night in a pet-friendly vacation rental in rural Flint. 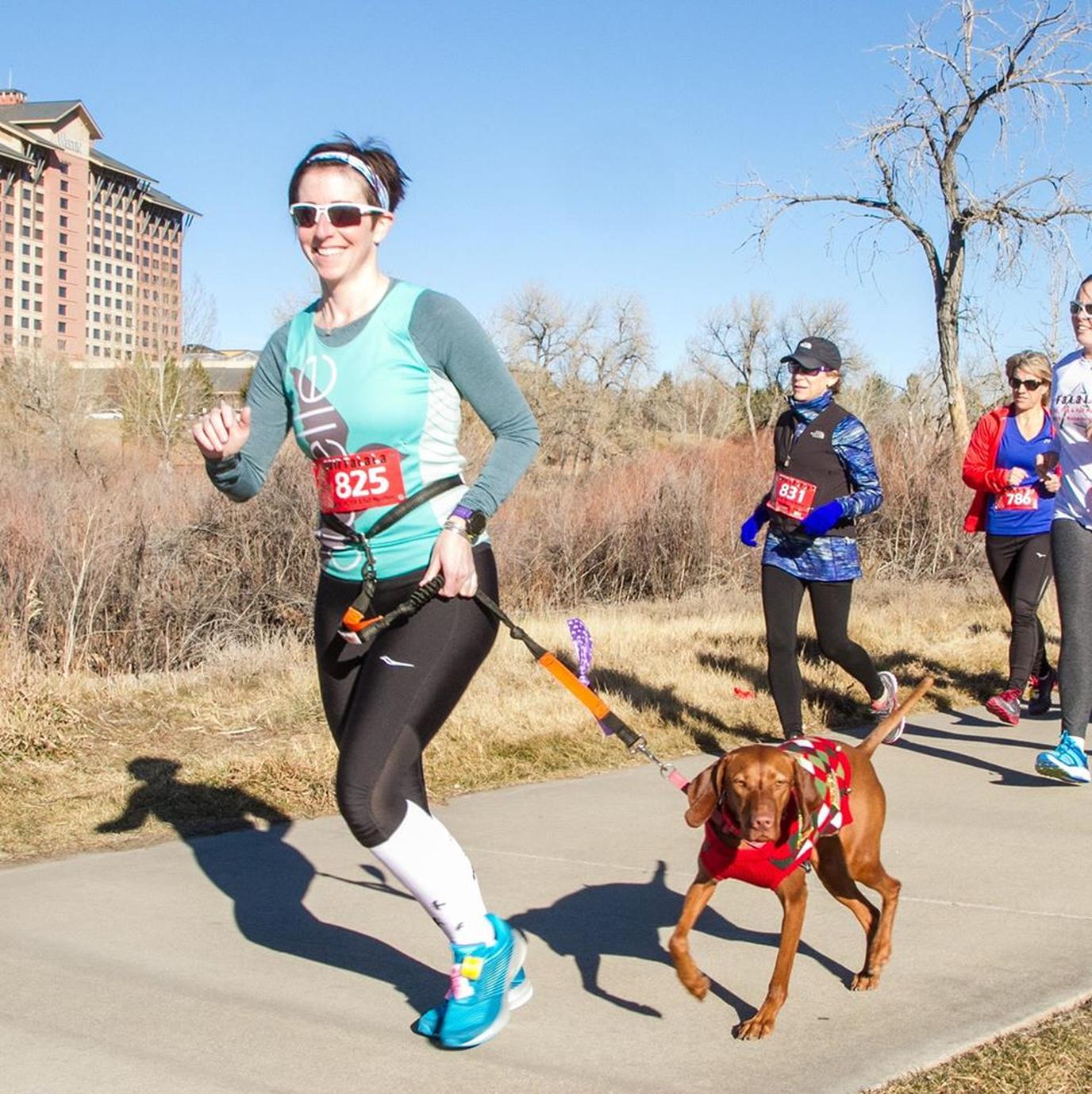 “Man, it’s hot. This sweater was a bad choice.” – Photo by Facebook.com/AllOutMultiPro

Fa La La is a pet-friendly race series in Colorado. Located between Denver and Boulder, the breathtaking Flatiron mountains provide a beautiful backdrop for the event. Participants earn themselves a shirt and swag for signing up. Dogs are welcome to enter the 1-mile dash, 5K, 10K and half marathon.

Fa La La will be held on December 7. Westin Westminster is conveniently located near the park, offering views across the green space and beyond to the mountains. Furry guests are rewarded for all their hard work with a bed and bowls to use during their stay. 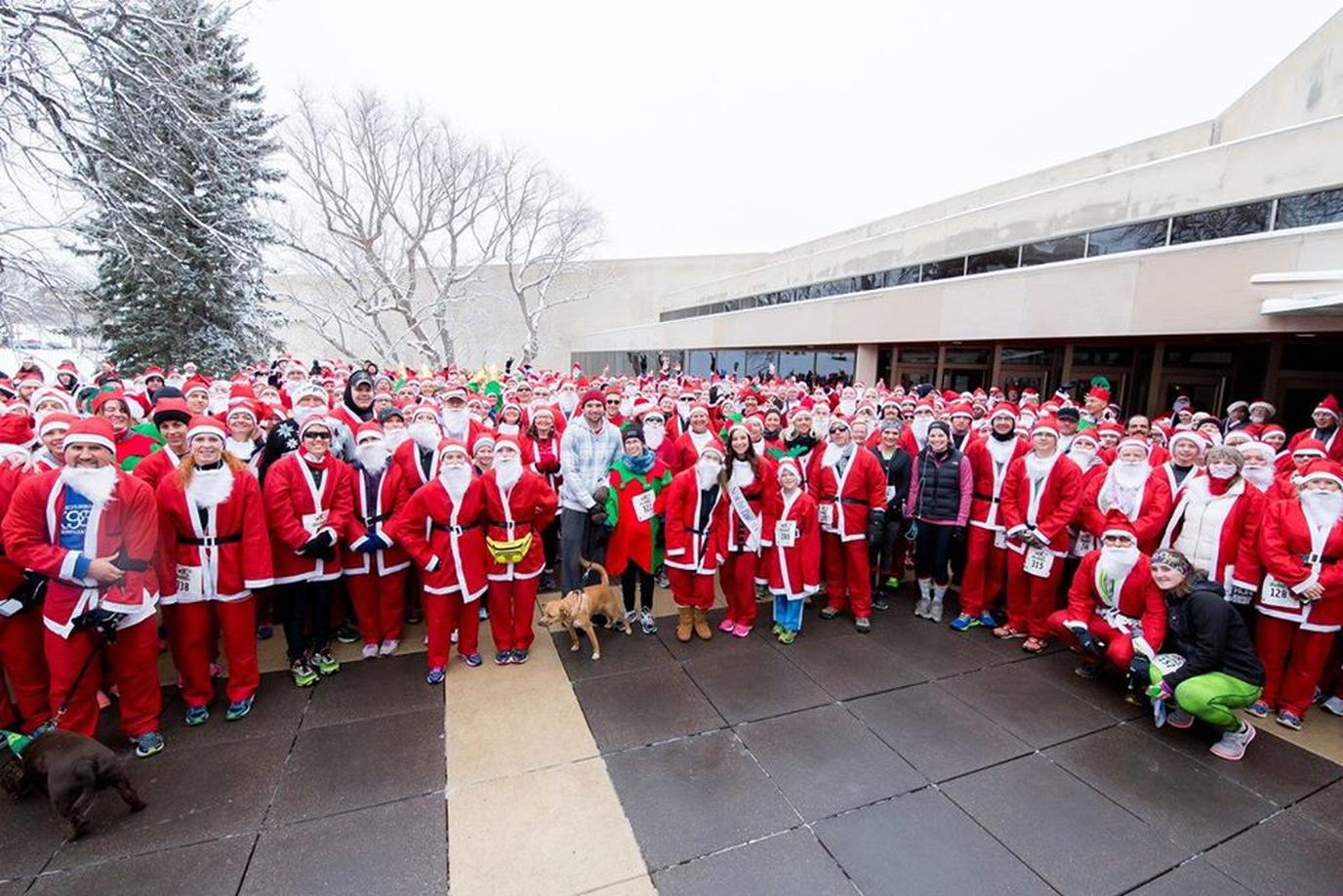 Which one is the real santa? – Photo by Facebook.com/bismarcksantarun

Bismarck Santa Run invites leashed “reindogs” to run with their owners. Participants are all provided with a Santa outfit on the day. When it comes time to collect your package, a volunteer will hold Fido’s leash while you head inside. Well-behaved pooches should join the back of the pack to stay out of the way of the hectic main group.

Bismarck Santa Run will be held on December 14. Don’t end your vacation at the finish line. Instead, discover treats and a good night’s sleep at Radisson Hotel Bismarck. 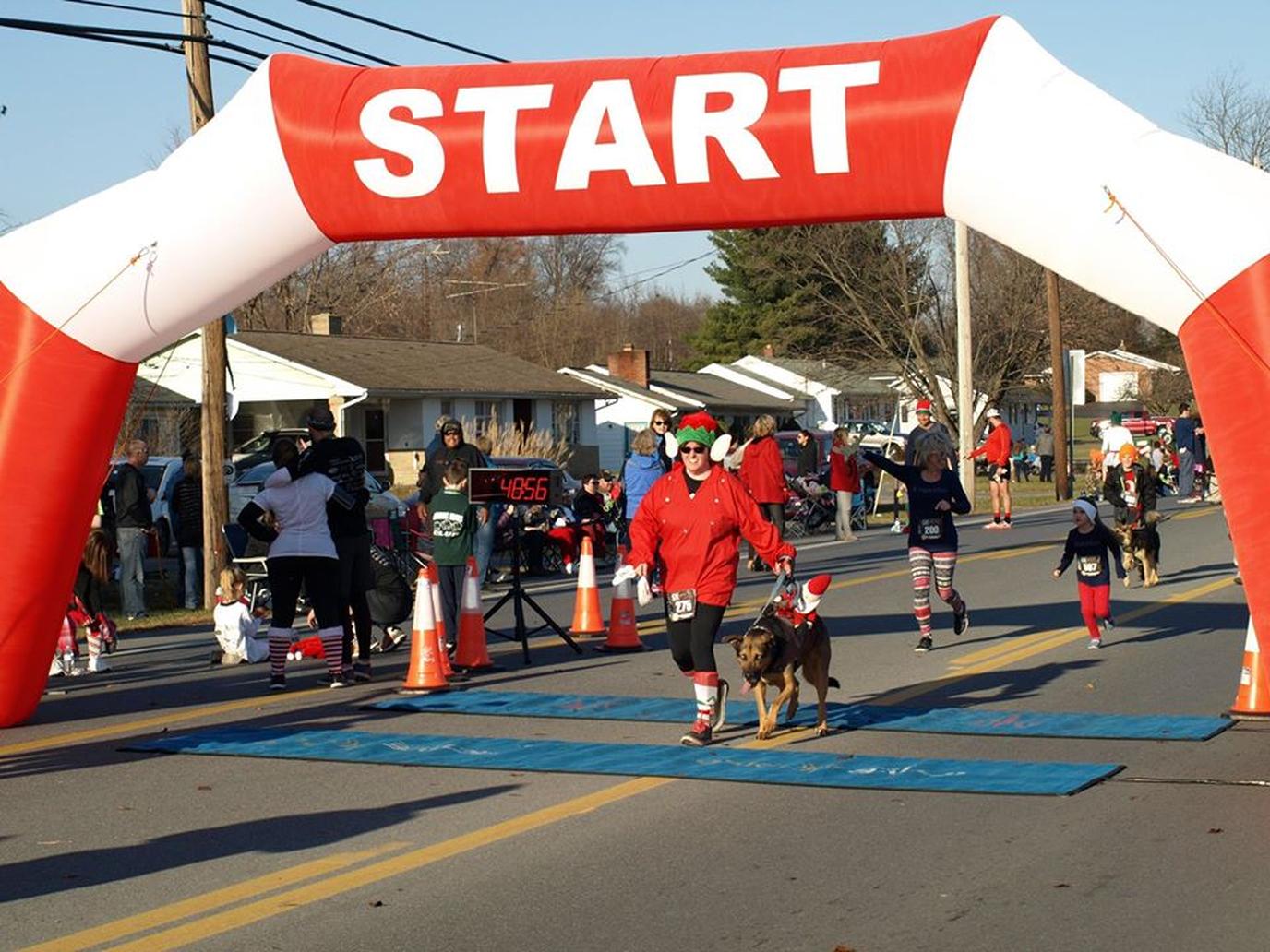 “Next year, you can carry Santa!” – Photo by Facebook.com/SouthBerkeleyChristmasParade5k

Kick off the festive period with a brisk run at the South Berkeley Christmas Parade 5K. Fido has to start at the back of the pack to avoid tripping other runners. Proceeds from the race benefit the Berkeley County Humane Society.

South Berkeley Christmas Parade 5K will be held on December 8. Experience a true West Virginia night in this High-Tech Log Cabin, equipped with all the modern comforts of home and all the charm of a traditional cabin. 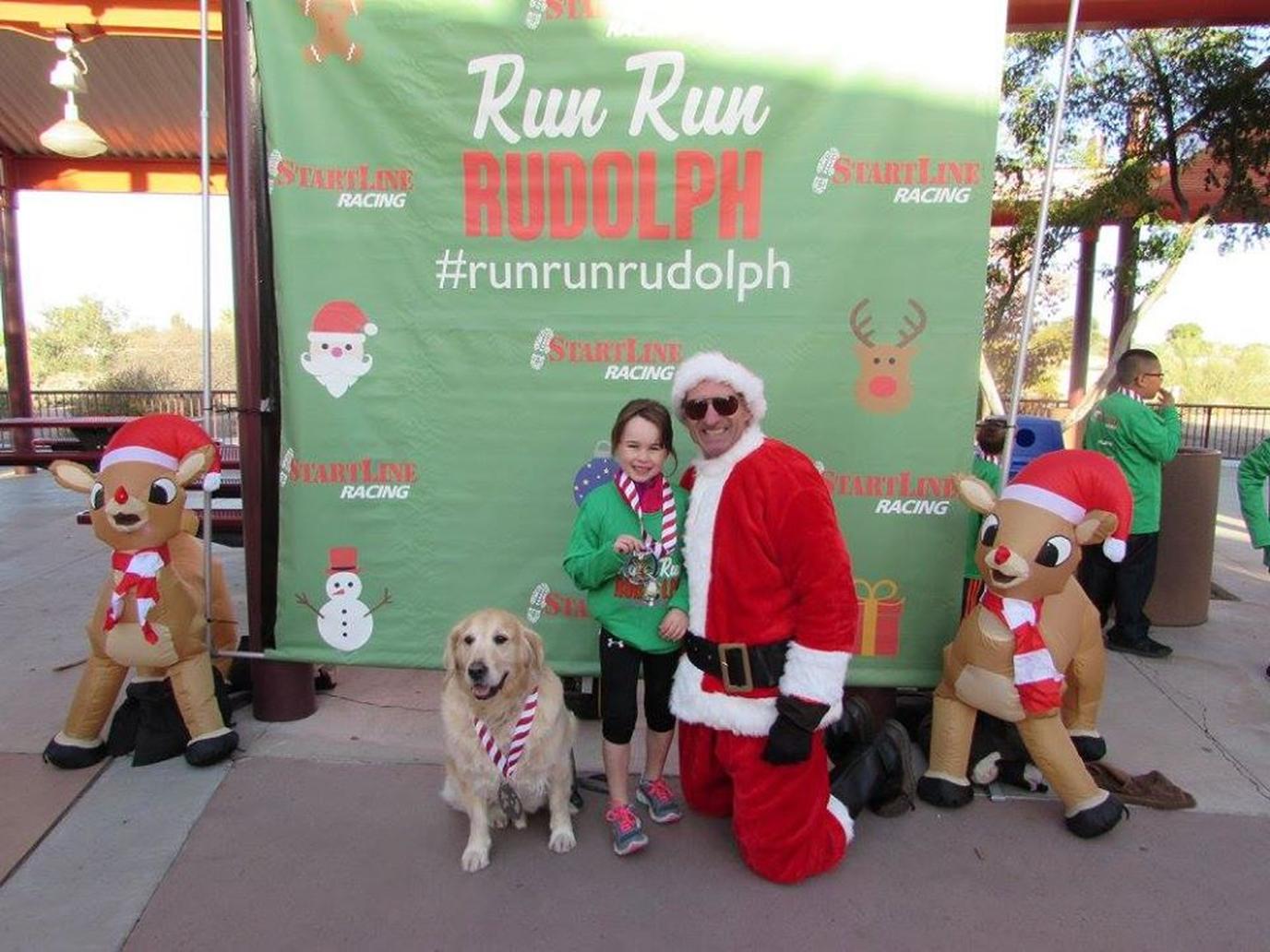 Bring Rudolph to the Tucson Run Run Rudolph Half Marathon. The race will lead you along dedicated running trails on a half marathon. Runners who aren’t quite ready for this distance can race in the quarter-marathon, 5K or Reindeer Dash instead. Participants receive a custom event medal, a shirt, hat and a chance to hang out with Santa. Leashed pups are welcome in every race. 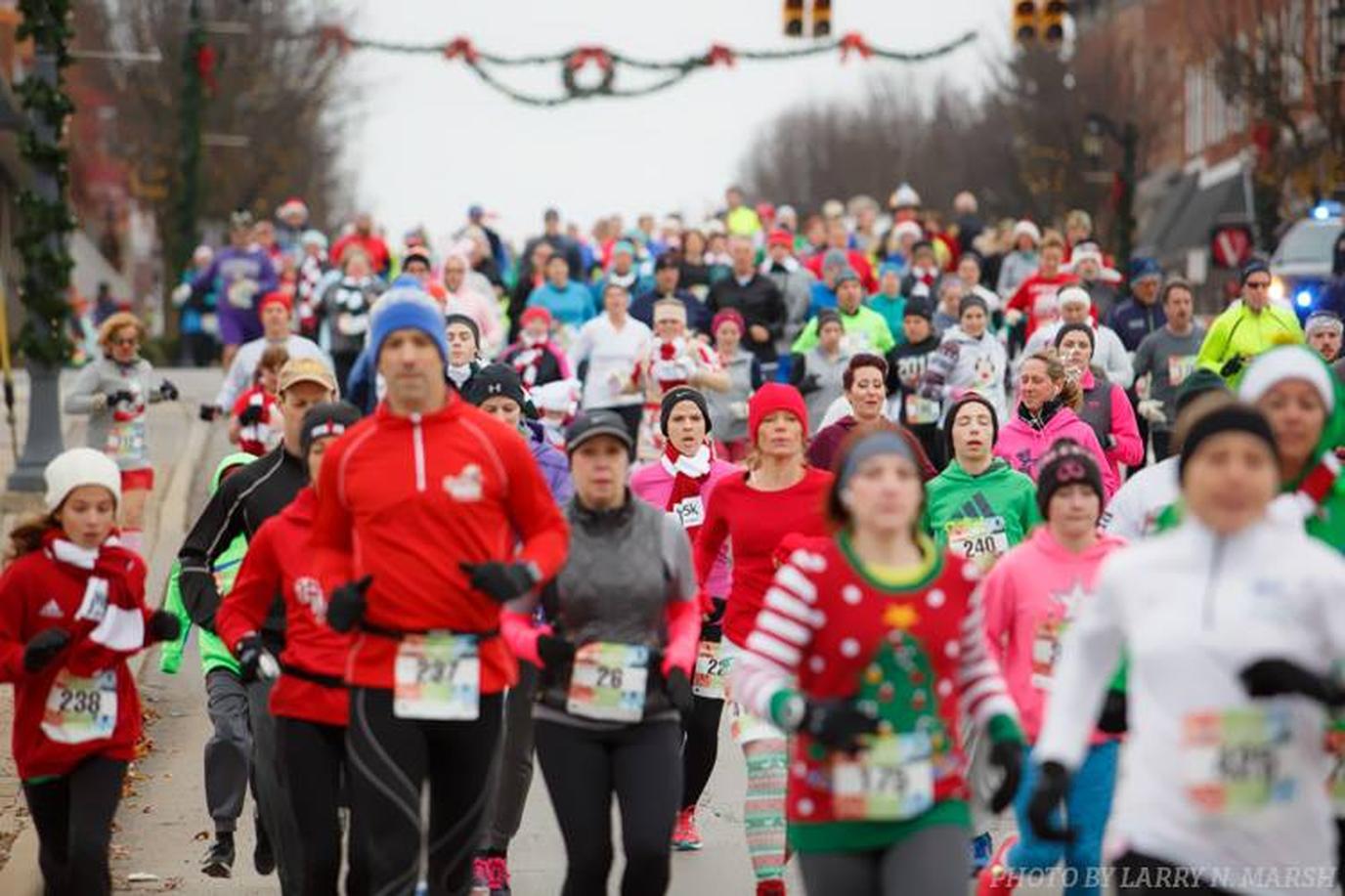 Where’s Fido? Sign up your pup for this year’s race! – Photo by Facebook.com/RunToledo

Miracle on Main Street 5K winds through historic downtown Sylvania, OH. The annual event includes a holiday market full of vendors and festive activities like Christmas artwork. After shopping for ornaments and indulging in delicious treats, line up for the fun run through the city. The street will be teeming with spectators, but they’re not just there to cheer Fido on. Santa Claus himself is the other guest of honor, arriving on a float after the race to turn on the town’s tree lights.

Miracle on Main Street 5K will be held on the first Sunday in December. After the race, explore the quaint town of Sylvania, the “City of Trees,” with a stay at a local pet-friendly Airbnb rental. 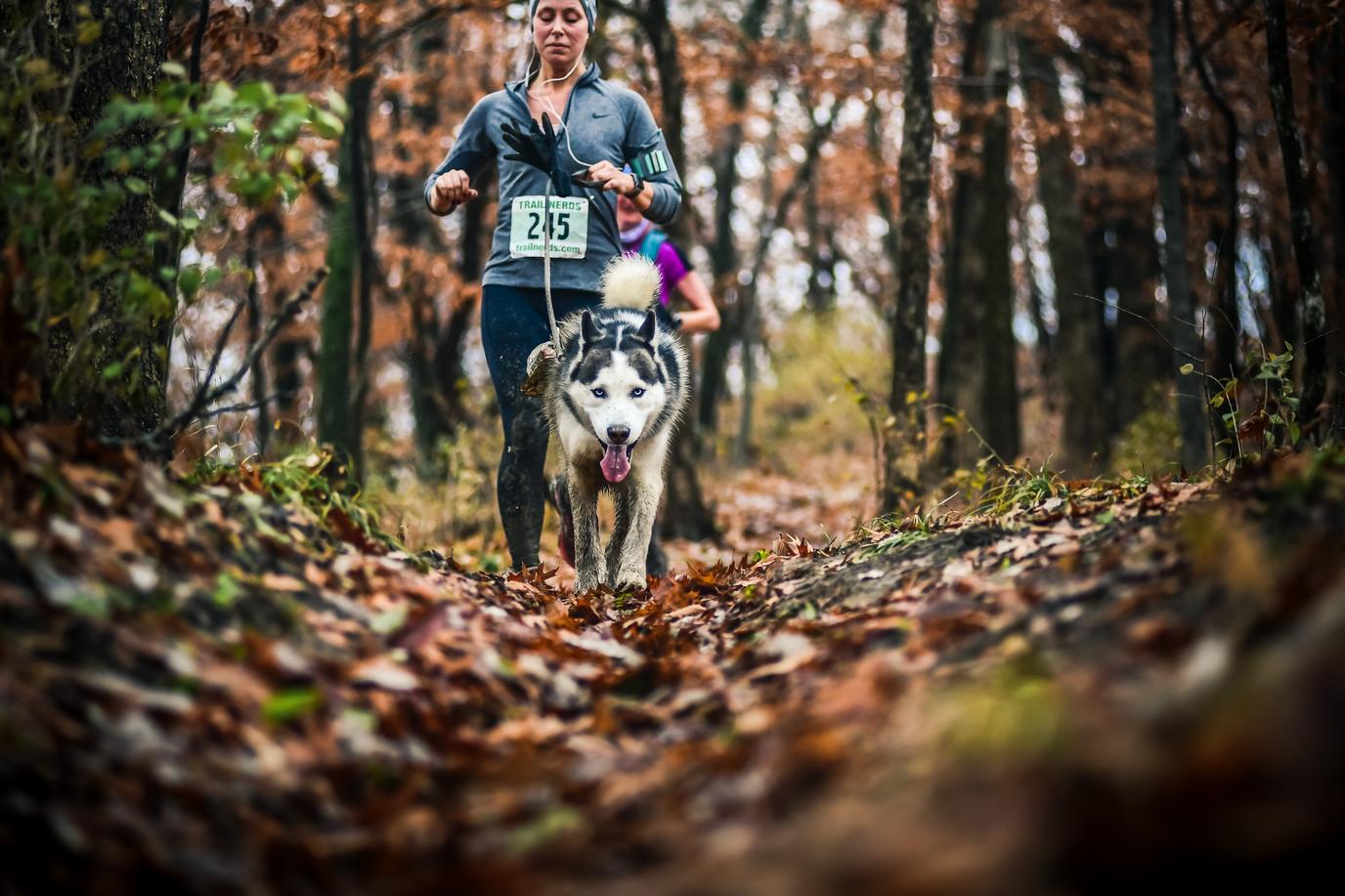 Alternate Chili Run is a unique race through the woods on the Wyandotte County Lake Park Trails in Kansas City. The 10-mile trek follows sections of the Psycho Wycho, a pet-friendly 50K woodland romp held in February. The field is limited to 120 two- and four-legged participants to keep the trails clear for passing. Racers receive a T-shirt, a calendar provided by the Mile 90 Photography team, and some delicious chili. Reminder: running after eating a bowl of chili is not recommended.

Alternate Chili Run will be held on December 7. Trail running is tiring work, but Fido can rest and recuperate at Comfort Suites Speedway. The friendly staff at this affordable hotel love welcoming canine guests.

This post from BringFido originally appeared as Running With the Elves: Pet-Friendly Christmas Races.

Health & Wellness Goals for Your Dog in 2020

Huddle With Your Husky in a Pet-Friendly Igloo

"Namastay:" The Benefits of Doga For You and Your Pup