Dogs’ Can Read Their Owner’s Emotions Dog owners often feel that their pooches are good at picking up on their emotions. This isn’t a figment of their imaginations. New studies show how behavioral and chemical cues from humans can affect dogs in ways that enable them to not only discriminate between their owners’ fear, excitement, or anger but also to “catch” these feelings from their human companions.

Just as human toddlers look to their parents for cues about how to react to the people and world around them, dogs often look to humans for similar signs. When their people project feelings of calm and confidence, dogs tend to view their surroundings as safe and secure. “The emotional connection between humans and dogs is the essence of the relationship,” says Clive Wynne, a professor of psychology and director of the Canine Science Collaboratory at Arizona State University. “Dogs are amazingly social beings, so they are easily infected with our warmth and joy.”

Multiple studies have shown that the transmission of emotions depends on the release of certain hormones (such as oxytocin), body odor changes in humans, the firing of key neurons in the pooches and their people, and other physiological factors. Recent research also shows that the extent to which people and their pups catch their owner’s emotions depends on the duration of their relationship. That’s an especially noteworthy phenomenon right now, as people and their canine companions continue to spend more time together during the pandemic.

Dogs also have “affective empathy”—which is defined as the ability to understand someone else’s feelings—toward people who are important to them.

“All of the empathy has some component of contagious emotions,” explains Meyers-Manor. “In some ways, recognizing another [creature’s] emotion is more complex cognitively speaking, whereas feeling what another animal feels is simpler.” When someone ends up sharing another person’s feelings, it’s often because during conversation humans naturally tend to mimic their companion’s facial expressions, posture, and body language, without being consciously aware of it.

“We know that dogs and humans synchronize their behavior—dogs often match the natural movements of their owners—so the fact that they synchronize their emotions isn’t surprising,” says Monique Udell, an animal behaviorist and associate professor of animal sciences at Oregon State University in Corvallis.

“Dogs are watching us very closely—some of this is based on our gaze and body language but also on the sounds we make and the scents we give off.”

When it comes to olfaction, “dogs are very sensitive to body odor—it’s how they can detect diabetes and possibly epilepsy [in people],” Wynne says. These odors were then aerosolized through a special dispenser in a space where the dogs could move freely in the presence of their owners or strangers.

Sharing a home, a life, a family, and activities contribute to the quality of the human-canine connection. Sharing each other’s feelings “helps us understand each other better, and it facilitates the bond that develops and how it’s maintained over time,” says Bekoff. “When dogs and humans share emotions, it’s like social glue.” It acts like a strong adhesive that binds us together—often for life. 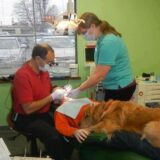 NEXT
Novel Gene Therapy, a Way to Help the Dogs with Osteoarthritis