“My Dog Can Communicate With Me; She Let Me Know About Her Dreams And When She’s Feeling Ill”

Every dog owner hopes they could read their dog’s mind and understand all of their pet’s thoughts. One woman claims to have discovered the secret to talking to her dog, and claims anyone can easily teach their dog to “speak” as well.

As a young puppy, Bunny the poodle mix was taught to communicate by Alexis Devine, and ever since then, they have been having very strange conversations. Bunny can communicate in a wide range of ways, from expressing her fantasies to asking for playing to alerting Alexis to problems. As she described to the Mirror: “She’s been able to express some pretty wonderful things in the previous three years, like when she had an ear infection or a foxtail stuck in her paw.

“She has the ability to inquire about absent individuals and animals. She appears to have discussed dreams and descended into an existential zone. Naturally, she can ask for a cuddle or some playtime.

Amazingly, Alexis used a customized button board with about 100 buttons to teach Bunny how to communicate with her.

When the clever dog has a question or wants to express her emotions, she just hit a button. Alexis, a graphic artist in Seattle, Washington, explained: “Since we first brought Bunny home at eight weeks old, I’ve used buttons with her.

“I’ve always wanted to be able to interact with her in as many different ways as I can in order to have the strongest relationship possible.

The sky is the limit. “She’s even developed several of her well-known words; Settle sound (be quiet), Sound walk (speak), Water hippo (seal), and many more.”

Alexis calls Bunny “sweet and spicy,” very smart, and quite sensitive. She has a strong sense of belonging to her people and can be cautious around strangers.

According to the committed dog owner, while button communication will differ from owner to owner, “the cornerstone is trust.” Alexis continued, “You’ll want to use phrases that are distinctive to your relationship with them and to their interests. You’ll need a thorough awareness of your learner’s intrinsic communications, including their likes and dislikes.

Therefore, while one dog can be fixated on a frisbee, another would prefer to unwind on a particular sofa.

But in order for your dog to communicate with you, you need to speak to them frequently.

Talking to your learner will help them create associations with the terms they’ll be utilizing, according to Alexis. 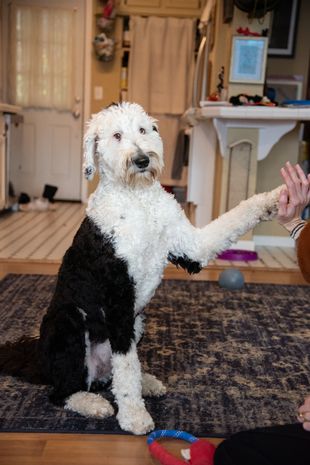 “You’ll need to press the buttons yourself so your student gets a visual illustration of what you’d like them to do.

“In the event that they struggle with understanding how to manage the button, paw focusing on instructional exercises can be very useful in empowering them to utilize their paws to investigate.”

Alexis shares Bunny’s great work on TikTok @WhatAboutBunny, where they’ve piled up in excess of 8,000,000 supporters around the world.

The couple utilize FluentPet’s HexTile framework to consistently impart, and Alexis says the key to breaking the procedure is “persistence and bunches of uplifting feedback”.