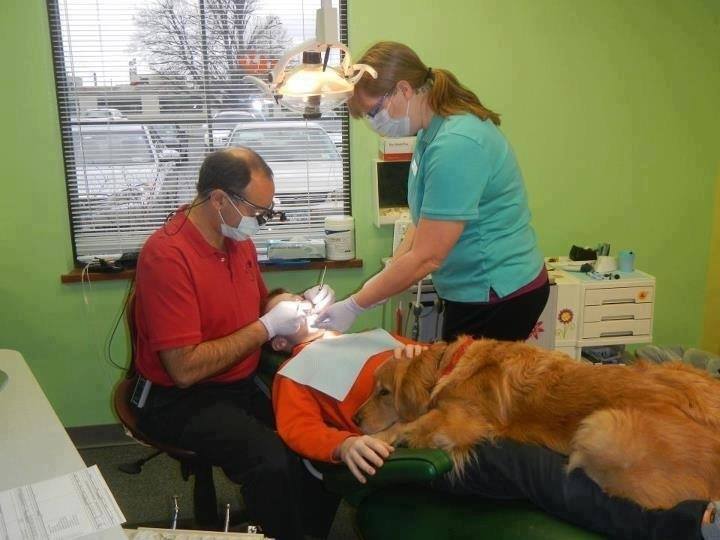 For the 11-year-old Levi McAllister who for the first time had a tooth pulled, he screamed, kicked, and struggled so much that his mom had to hold him down.

But when he returned to Charlotte Pediatric Dentistry in January to get two more teeth pulled, he was surprised when dental hygienist Barb Kucera introduced him to a friendly yellow Labrador retriever named Atkins.

“Would you like Atkins to lie on your lap?” she asked. Levi nodded, and as Levi stroked the soft fur on Atkins’ ears, the dentist numbed Levi’s mouth and eased out two of his teeth.

“The dog made me feel happy and calm,” Levi said. Across the country, a growing number of dentists are bringing in four-legged staff members to reduce stress for both children and adults — typically at no additional cost to patients.

However, there’s a lack of regulation where dentists can bring dogs without restrictions. Possibilities of putting patients at risk for an infection or a dog attack. Patients with allergies or a fear of dogs might also have concerns.

In North Carolina, there are concerns about sanitation and safety that prompted state regulators to approve a rule allowing only certain types of highly trained dogs in dental exam rooms. It took effect in June 2021 and is thought to be the first regulation of its kind nationwide. As many as 1 in 3 Americans experience dental anxiety and fear. For them, a visit to the dentist can be terrifying, and research indicates dogs can help. A small study published in the journal Animals found that patients with a fear of the dentist who had a dog lie on their laps during treatment experienced a decrease in their stress and blood pressure levels.

Other research shows animals in health care facilities can reduce the perception of pain and boost patients’ moods.

The North Carolina State Board of Dental Examiners published an initial rule that would have allowed only service dogs for patients with disabilities in dental exam rooms, effectively banning “rehabilitative facility dogs” like Atkins. In response, dog lovers and dental patients flooded the board with emails, said Bobby White, the board’s CEO and legal counsel.

The board then proposed also allowing facility dogs in dental offices.

Facility dogs are trained to work in specific professional environments. For instance, Atkins had to be desensitized to sounds such as the screech of the dentist’s drill. The dog also had to practice laying her head on a patient’s lap and staying still while a dentist works. PREVIOUS
Private Jets, Luxury Hotels and Butlers for Your Dog NEXT
Dogs’ Can Read Their Owner’s Emotions