Have you ever heard the police referred to as “the fuzz?” HA! Me too! Well, now one police department has taken that reference to a whole new level because of a rescue puppy!

Kathryn Smith of the St. Paul Police Department in Minnesota answered a call on a nearby farm. A stray mama dog had been hanging around and she had given birth to a litter of puppies. Smith took the pup family to a local rescue group but not before adopting one of the puppies herself. “Our chief brings his dog, Stella, in on Fridays, so we thought it’d be nice to have the puppy come in here and there, too,” John Lozoya, the senior commander of community engagement for the department, told The Dodo. “He was an instant hit with everyone.” Due to a high-stress job, Sgt. Fuzz is the perfect distraction. Staff realized that after visits with the puppy, they felt calmer. Getting cuddles with Sgt. Fuzz was exactly what they needed to put a smile on their faces.

That’s when the department decided to hire Sgt. Fuzz to be their official “Cuddle Officer” (Yea, I just about fainted too!) He spends about 10 hours a week at the office. The staff loves to play ball with Sgt. Fuzz, hang out with him, and most importantly, give him loads of cuddles.

“He’s very playful but also loves to be cuddled,” Lozoya said. “His personality is very welcoming. He’ll lay down and let anyone pet him right away. He’s a very mellow puppy.” Once Sgt. Fuzz is old enough, he will be enrolled in a therapy puppy program so he can help more people feel at ease during stressful times.

“We hope one day when he is a certified therapy dog, he can not only assist with our staff but also with people who have been victimized and are in need of support,” Lozoya said. “Since the beginning of police and fire departments, animals have always been with us,” Lozoya said. “He’s sort of this new evolution to a working police canine, who just happens to look like a fluffy teddy bear.” PREVIOUS
10 of the Healthiest Dog Breeds in the World 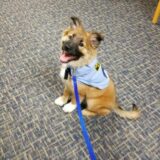