Top Hero Dogs 2022: These Are The Ten Breeds Of Loving Dogs That Make The Best Police Dogs

Many of us have decided to bring new puppies into our homes. According to Kennel Club statistics, dog ownership increased when the pandemic struck, and the desire for four-legged companions is still high today.

There are 221 distinct breeds of purebred dogs to pick from, along with countless crossbreeds, so you’ll need to think carefully before choosing the newest member of your family.

Dogs do more than just make wonderful companions; they also work in a variety of occupations, including those in law enforcement.

The ideal police dog is bright, devoted, diligent, and capable of understanding and responding to commands effectively.

They possess qualities that make them useful to any family house, as well as to a police station.

Below is a list of the top 10 dog breeds for police work. The Belgian Malinois is somehow smaller and quicker than its close relative, the German Shepherd, and is frequently mistaken for one. They are the second most common police dog, quick to apprehend criminals, and skilled at smelling explosives. The German Shepherd is the ideal police canine. This breed excels at all kinds of police enforcement tasks, from tracking down suspects to sniffing out drugs. In Germany and other countries in continental Europe, boxers are a common breed of a police dog. Throughout both World Wars, they had a history of serving in the military as a guard, patrol, and courier dogs. They are the best friends of many officers because they have the ideal combination of intelligence, loyalty, and desire to please. The cute Labrador Retriever is one of the friendliest K-9 police officers. They were bred to find downed birds during hunting expeditions, but they are now superb bomb and narcotics-detecting officers. In the USA, most police forces favor them in particular. The Bouvier des Flandres, another dog favored by police services in continental Europe, is a rare sight in British parks. Due to their intelligence and courage, which means they would promptly obey orders even when their safety is in danger, this breed has a distinguished history as a law enforcer. 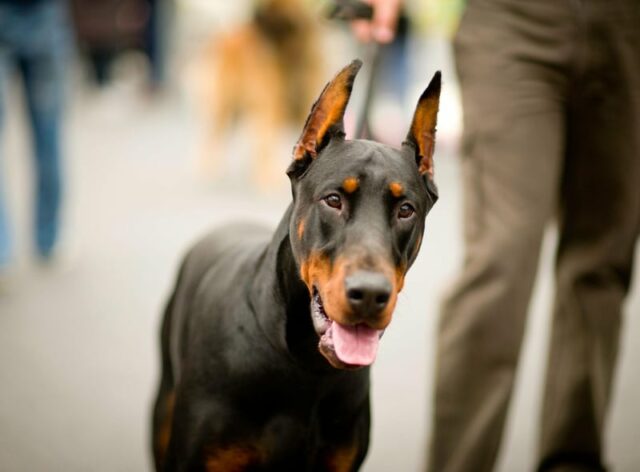 A fearsome Dobermann, frequently shown in movies and on television as the classic police dog, is likely to make even the toughest criminal cower in fear. These canines are used almost exclusively for fast-paced, athletic police work that involves chasing down suspects and pinning them on the ground. The Staffordshire Bull Terrier is an increasingly popular breed among police enforcement organizations because it is courageous, athletic, quick, and sturdy. Even rescue staff mostly utilized for detecting and patrolling duties have been known to join the force. The Bloodhound was the first police dog in many aspects. Due to their extraordinary sense of smell, they have been utilized for generations to locate items, suspects, and missing persons by following scent trails that may have been present for days or weeks. They are non-aggressive, which makes them very good at finding lost children.

The naturally aggressive temperament of the Giant Schnauzer can make for a dedicated police dog who will go above and above to track down and confront suspects. They are excellent search and rescue dogs due to their obstinate reluctance to give up on any endeavor. The Briard, a French breed employed for guarding and herding sheep, is a breed that the majority of people have never even heard of. They now make courageous guard dogs and watchdogs and are frequently employed in search and rescue operations.